Day 5 Thursday started REEEALLY early, were had to be up by 4.15am and were in St. Pancras train station by 5.15am (cab driver told us it would take 45 mins to reach, but it actually took only 20 mins). Our cab was expensive (GBP35) but we had no choice since the trains don’t run so bloody early in the morning. So in St. Pancras, we waitied for about 1.5 hours for the train (6.50am), while eating our breakfast bought from Asda the day before.

Eurostar leaves from London to Paris in takes about 2hrs 20mins via the Channel Tunnel. Once in France, you can see vast empty fields dotted by small villages with a church steeple in the middle. Very quaint. The train cabin is simple but quite comfortable. 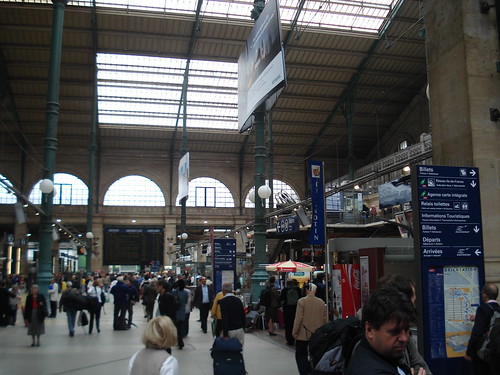 The disembarkation point in Paris is the huge train station Gare du Nord. As soon as you alight the train and onto the platform, this is the first sight that greets you: 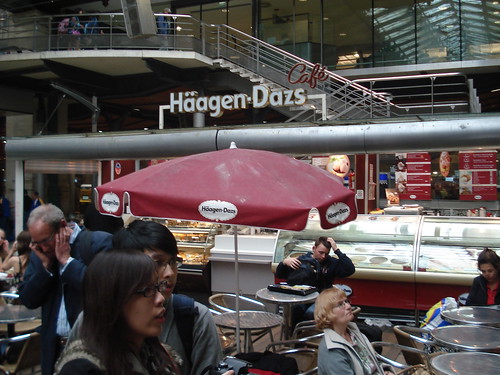 (I guess American megacorporations are slowly taking over the world)

By the time we were in Paris, it had started to drizzle, and it was pretty cooling despite in summer. Our French guide Cyril was there to meet us. After a roll call, we were quickly brought to a tour bus. We were taken on a whistlestop tour around Paris, and man, the traffic there is horrendous. Good thing we didn’t decide to find our own way! In retrospect, going to Paris on a guided tour is advisable if you don’t understand the language. For GBP219 (RM1095), we get return train tickets, a bus tour, free entry to Eiffel tower and the Louvre, plus 1 night stay in hotel. 2nd day is free and easy. Very worth it, hor?

Cyril gave us a condensed version of the history of Paris, meantime pointing out some of the lesser known landmarks along the way. But they were all interesting, like this row street where all the most expensive jewellery stores are located. 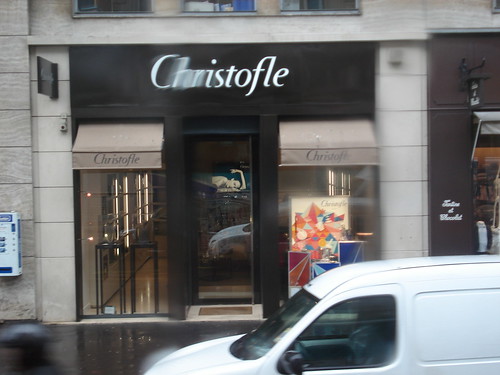 This square (i forgot the name) is where Princess Diana stayed just before she had her accident here.

Cyril brought us to a square located between two museums, where we had a direct view of Paris’ most famous landmark. At the time the rain had just stopped, but it was still cloudy. The place, like most tourist spots in Paris, has many Africans trying to sell you trinkets and stuff. Just say no or ignore them if you’re not interested. 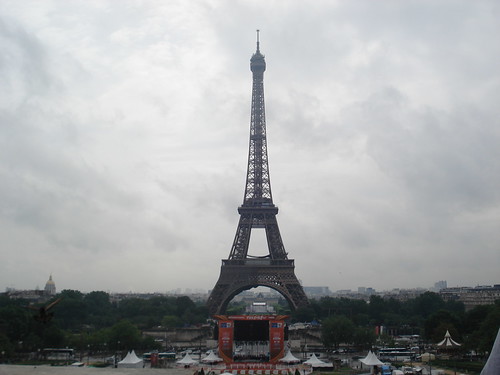 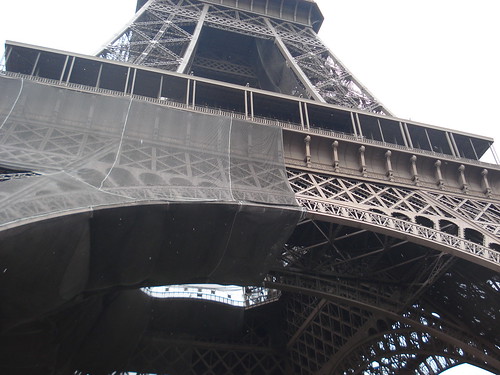 Our tour entitled us to go up to the 2nd level of the Tower, which has a fantastic view of Paris. You can see very far if the day is clear. Very beautiful. 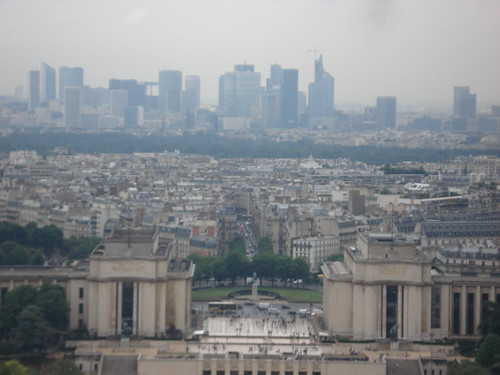 Sitting on the bench looking out onto the Paris skyline, we had our packed lunch of bread and yoghurt.

After lunch we were taken on a River Seine cruise, Pat said that this was the highlight of our visit to Paris. It was really good, audio commentary was available in English. 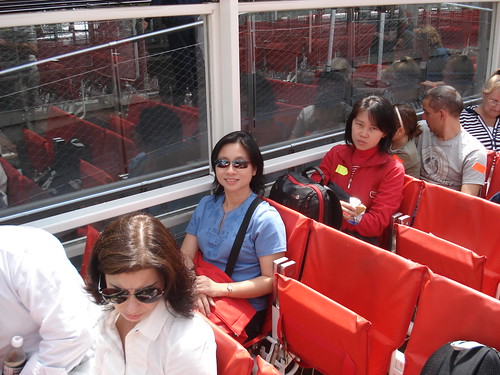 Seine is typefied by many beautiful bridges across it, each with its own interesting story and history behind it. 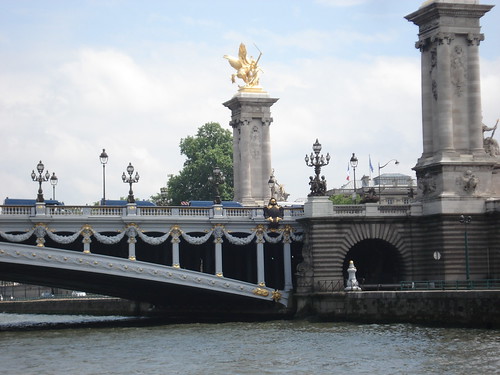 Of course, you can also see dozens of medieval buildings that make Paris so romantic. 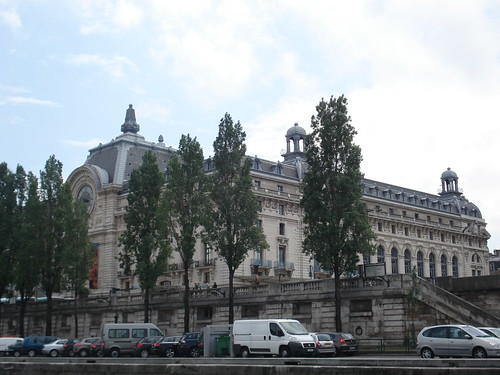 Next was our visit to the famous Louvre Museum. This is the glass pyramid designed by I.M. Pei, featured in the Da Vinci Code. 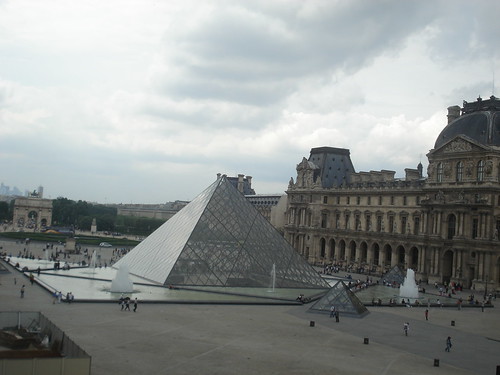 Louvre is a huge museum with thousands and thousands exhibits, almost every nook and cranny and ceiling is covered with art and items.

But actually, after visiting the British Museum, we were didn’t really want to spend too much time here, basically spent some time to look for the ‘Three Ladies of the Louvre’, who were… 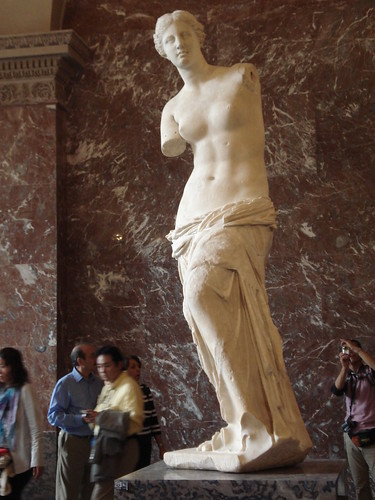 The Winged Victory of Samothrace (the Greek Goddess of Victory, Nike)… 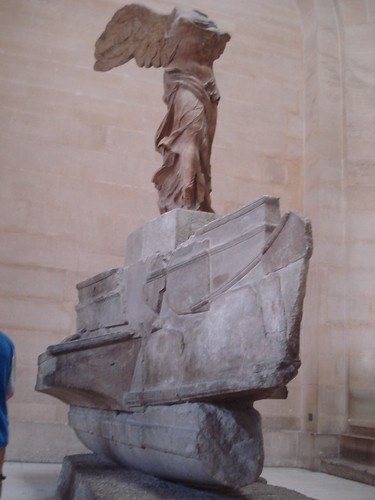 and the most famous of all, the Mona Lisa.

On the wall directly facing Mona Lisa, is one of the biggest paintings in the Louvre, the Wedding at Cana. You can’t really see it in the pic, but the painting stretches from the floor right up to the ceiling. If you read the description in Wikipedia, there are lots of subtlety in the drawing, least of all Jesus looking straight at you.

We were getting really tired by 5pm so we decided to check in our hotel. But first, we had to find it. Armed with a map from Cyril, and a handy Metro map (very useful, this isn’t easily available in Paris) we plunged into the labyrinthine maze of Paris’ underground.

This is a self cleaning toilet found all over Paris.

We exited out at Republique station, a large interchange. Above on the streets, its actually a small park in the middle of a 7 road interchange. We tried (unsuccessfully to find our bearings) so we decided to ask a nice French lady. Unfortunately, she spoke no English (or perhaps refused to) so judging from her hand gestures, we decided to go one direction. She was right and we found our hotel some 200m away.

Despite some negative reviews on tripadvisor, we found our room quite clean and nice.

Dinner was at a small restaurant near the hotel. We chose it coz it was affordable, plus the menu had English translations (altho our nice waitress didn’t speak English). This was my steak, followed by coffee and beer.

After dinner we took another metro down to the Champs-Elysees, the famous road lined with posh shops and restaurants leading up to the Arc de Triomphe. It was a beautiful sight of the Arc with the sun setting behind it.

We passed by the flagship LV store. No, we didn’t go in.

We used the underpass to get to the Arc. Really beautiful in the evening light.

By nightfall, we walked a long distance to the Seine to catch the Eiffel Tower lights.

It was a long day for us, almost 20 hours, and we had a very good night sleep in Paris.