So we’re now at Day 3 in Gold Coast (Day One and Two here). Woke up bright and early to sunny yet cool weather again. I was initially worried of rain during my stay here, but thankfully not a single drop of rain came, nor any extreme hot weather. Come to think of it, I didn’t sweat a single drop during my stay there (UNLIKE here…). But that didn’t mean I wore the same shirt everyday…

I set my mind to catch the whales months ago when my good friend Raymond told me about it (he came to GC a few years back with his family). He was raving about it, so i decided i had to experience it myself. My trip coincided with the very tail end of the whale season, when all the whales are migrating from the Great Barrier Reef back to Antartica, so there’s a chance i might be just too late to catch them.

Then there was some complications. The trip organizer sent me a text message a few days earlier, first telling me my trip was moved to Wednesday afternoon (it was initially booked on Thurs morning). So fine, i moved my schedule around to suit them. On Wed early morning I called the skipper of the boat again to confirm my booking, but lo and behold, they told me they didn’t have any space for my family and would refund my money (booked via credit card earlier).

So what could I do? I immediately called Seaworld Whale Watching Tours, I got their brochure from the hotel lobby. At once they told me they would happily accomodate us, but we had to be there at 9.30am.

Woo-hoo! So I woke everyone up (it was about 7.30am at the time), made breakfast (coffee and croissants, and some fries leftover from all those happy meals for the kids) and got dressed.

Then it was a short drive to Seaworld again (2nd time in two days). 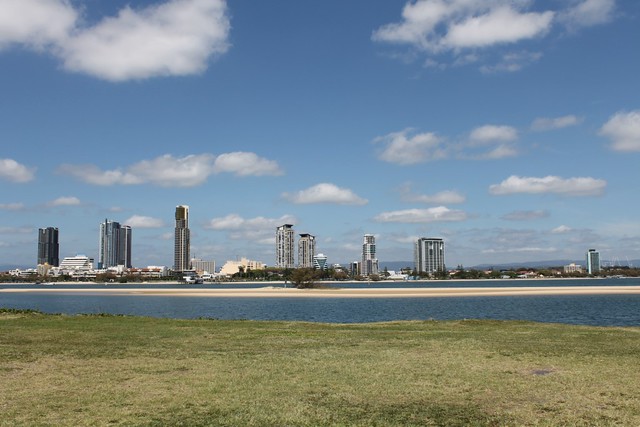 (scenery on the way to the docks)

This was our boat. It’s the most advanced and luxurious whale watching vessel in Australia, with minimal underwater sound to avold distracting the whales. 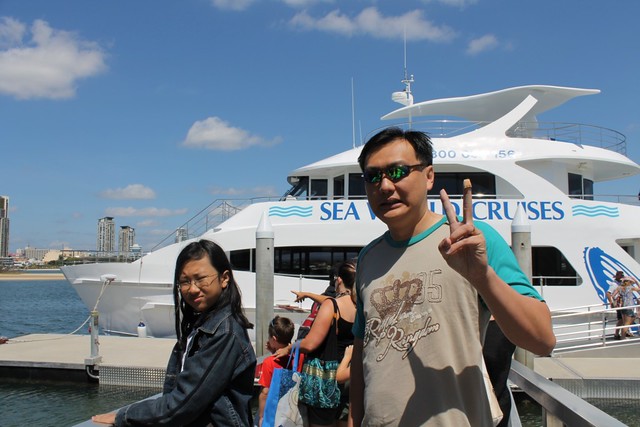 After a short briefing by the crew, we were off. But suddenly we had to turn back to pick up a couple who came late. Eh, next time come earlier can or not?! 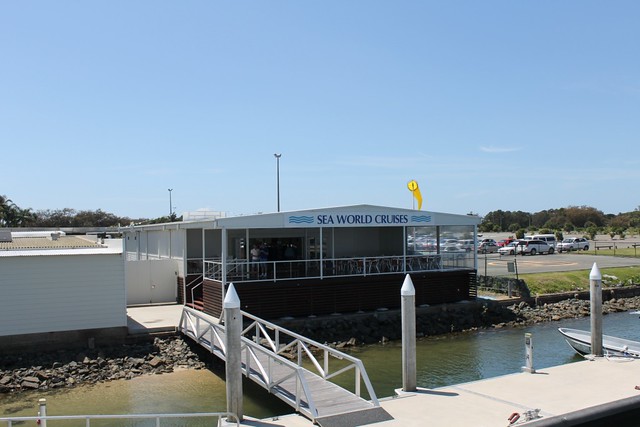 Just after 10 minutes out to sea, we were in whale territory already. The migrating whales tend to keep very close to the shore. 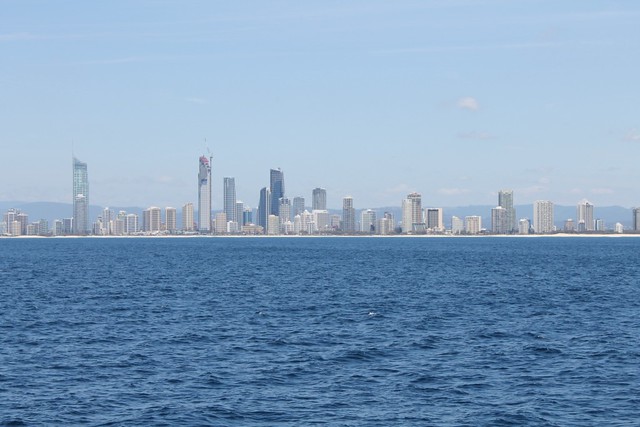 (Look! its our apartment out there! I hope we have enough petrol to get back…)

Also the day was clear, the strong winds made the water a little choppy (more about this later). Hannah, for one, doesn’t like strong wind. 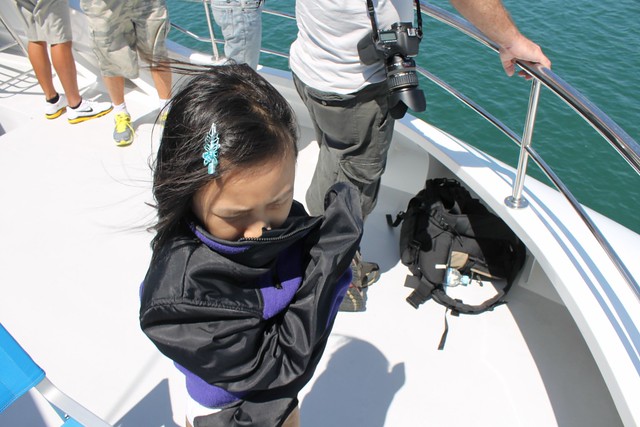 And after a short while, someone spotted the puff of steam and water in a distance and we saw the whales! The first pod of whales consisted of at least 4 large whales, but they were moving fast, meaning the took longer dives underwater. The second pod we saw was mother and calf, this pod was more visible. 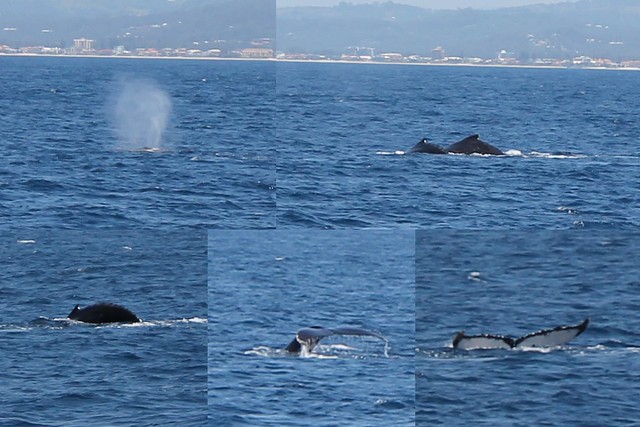 (collage photo showing the whales puffing, surfacing, and diving. Now you know where the phrase ‘whale tail’ came from.) 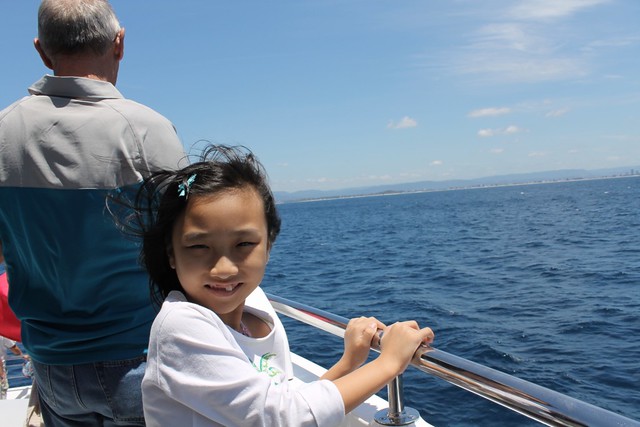 (Mood has improved after seeing whales)

So it was a great time coz we managed to see so many whales. Whale watching is all about patience though, and you need a good pair of binoculars to see them coz boats are not allowed to go nearer than 100m to the animals. But to me it was all worth the money (about RM900 for 4 of us) coz you don’t often get a chance to see one of the largest animals on earth in their natural habitat, and with this animal facing extinction, i doubt there will be many more chances for us to experience this.

Contented and a little sunburnt, not to mention a little seasick, we drove back to Broadbeach for lunch. Where? At another surf club! This time at the Kurrawa Surf Club, just 500m from our hotel. The patio deck was packed, but service was quick and the food was good (better than Currumbin). 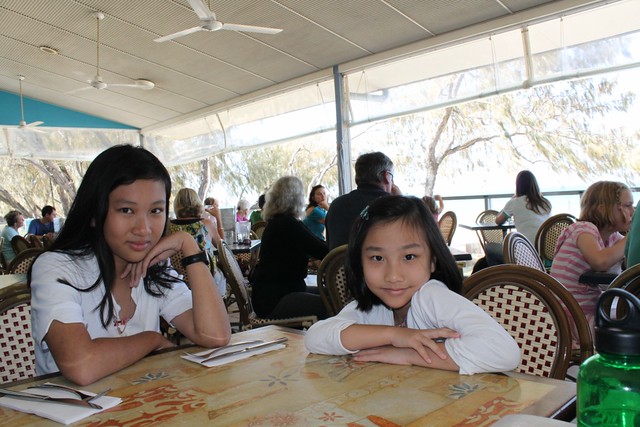 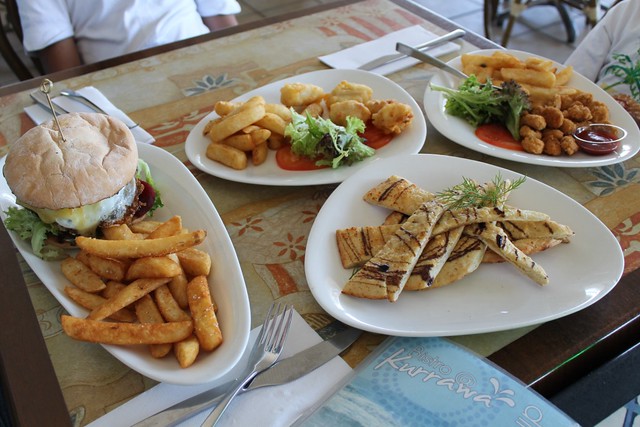 After a hearty meal, the kids went down to Kurrawa beach to play. The sand is powdery soft and fine. The 1pm sun is burning down yet its cool and windy. 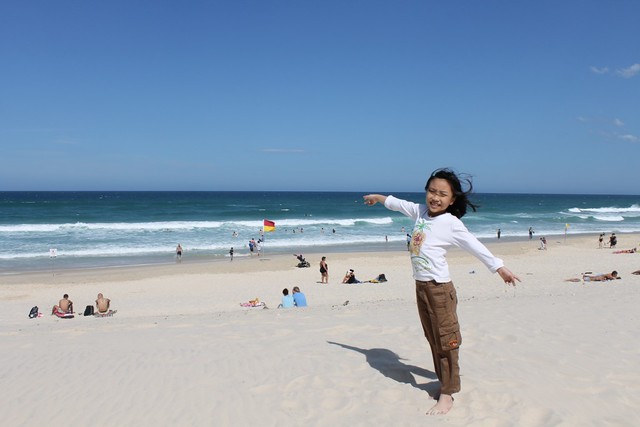 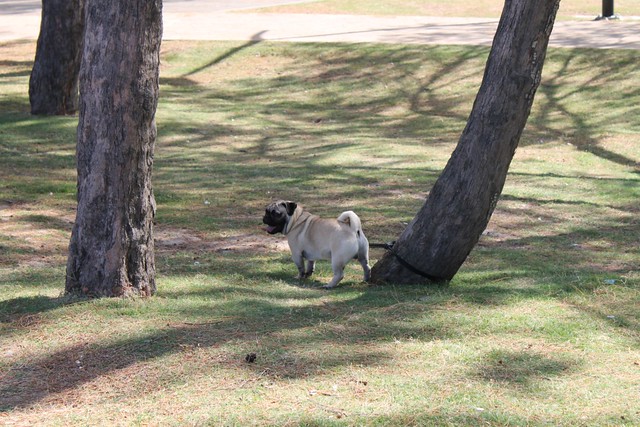 After lunch i went back to the hotel to sleep. My kids went down to the indoor heated swimming pool for a swim. There’s actually two pools in our apartment – one outdoor and one indoor. Is this and awesome apartment or what?! 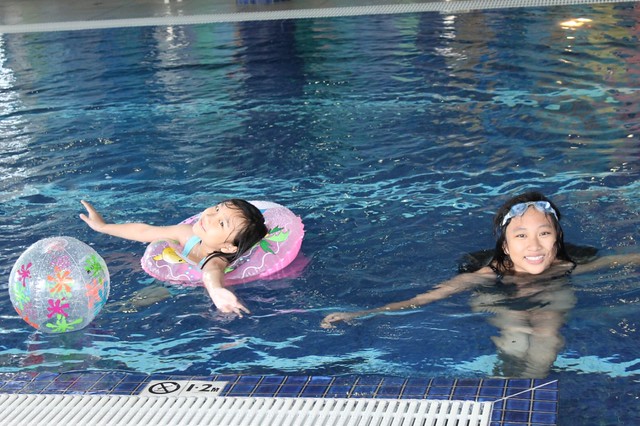 Q1 Tower
Evening – while the sun was still up, we went to the observation deck of Q1 Tower. Its the tallest building in Surfers Paradise, giving a complete 360 degrees view of Gold Coast, something like our KL Tower. I know you think this is a little touristy and nothing exciting, its a must-do here in GC. 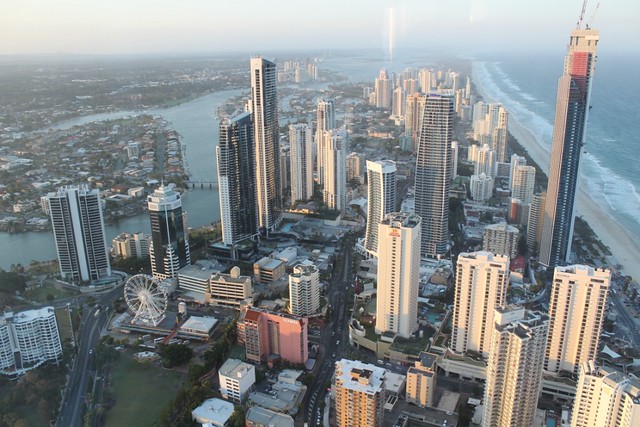 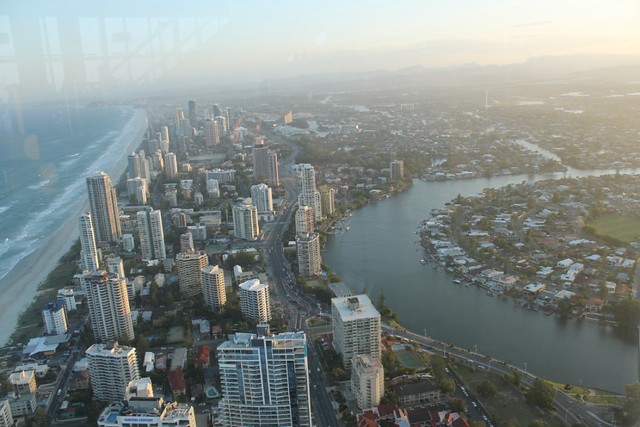 (and the view of the beach to the South. That’s Broadbeach and Burleigh Heights)

As you can see, most of the developed areas of GC are on the narrow strip of land between the Pacific ocean and Nerang river.

After Q1, we went down to the Night Market at Surfers Paradise promenade. It’s a lot different from our pasar malam, quite small, selling mostly handicraft items and not really cheap. But it’s something different to experience to walk the beach at night. 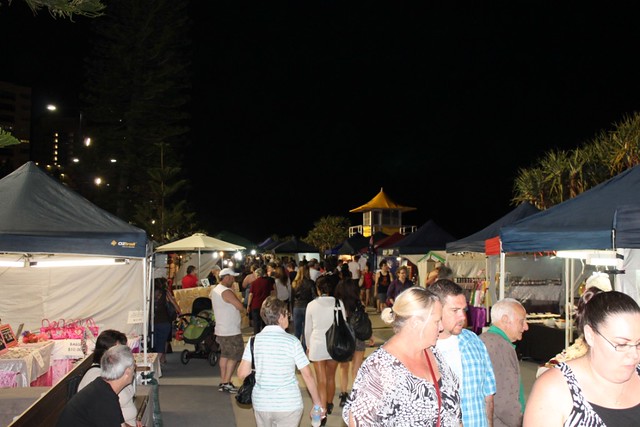 From there we went through Cavill Avenue in Surfers to do some shopping and dinner. Saw this street performer, quite funny.

After walking about and checking out all the restaurants, we decided to buy kebabs and pizza from this take away store. The one on the left looked far more popular with the Arab tourists, the right one no business, so we went with the crowd. 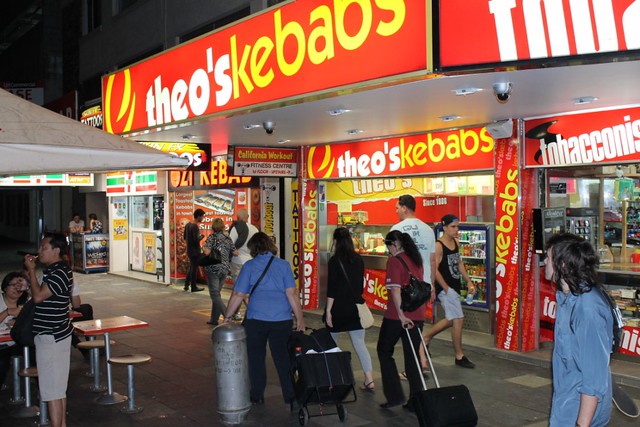 Dinner was on a park bench looking the street. 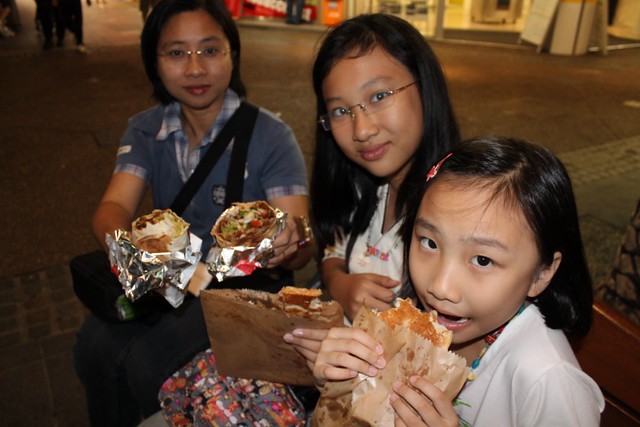 Round the corner from the kebab place was another of our vices – Gelato! We ate gelato / ice-cream SEVEN times in the 4 days here, this was probably the best one. 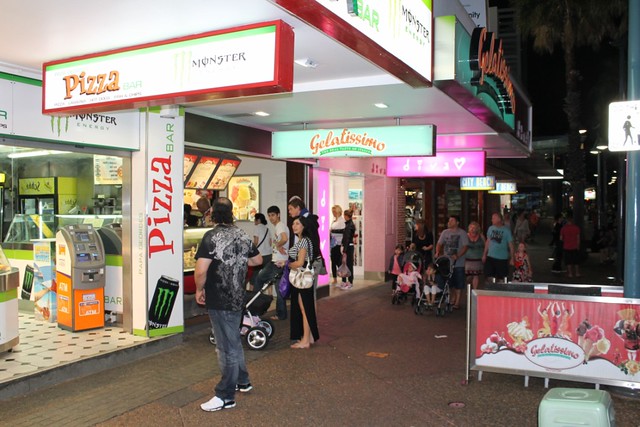 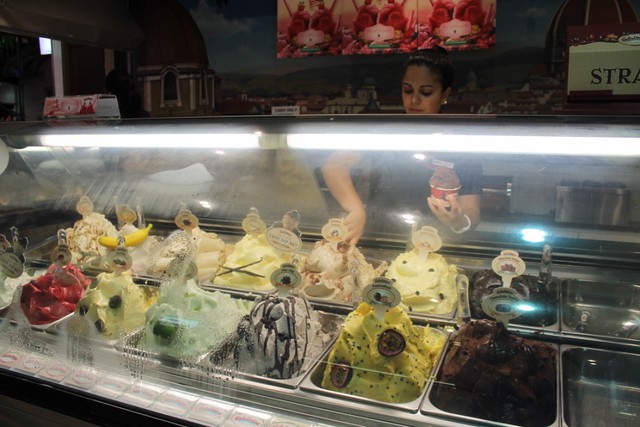 So that wraps Day 3, back to apartment to watch some TV and sleep. Tomorrow, we conquer Hollywood…