When my friends found out i was going to Bandung for holidays, most of them asked me “why Bandung?” or “what’s there to do in Bandung?”. Bandung, nicknamed Kota Kembang, is a fantastic holiday destination, but isn’t well known outside Indonesia. While researching for this trip, I also found out that info on the Net about Indonesia’s 4th largest city is pretty scant, so I decided that I’d do a list like this after coming back, so here it is. Bear in mind this is based on my family’s short experience there, there are definitely many more attractions there that we didn’t have time to take in.

The list is divided into 3 general sections: What to see (the natural attractions), what to do (shopping) and what to eat (the food, of course). We’ll start with the biggest attraction of them all:

1. Tangkuban Perahu
Its visible from anywhere in Bandung, and takes an hour’s drive to get up there. It’s cold like Camerons there, and you can look down on Kawah Ratu, the largest of the few volcano craters there. Even from a distance of about 200m, its breathtaking. You can also hike down to see the crater of the live volcano up close, but its a long way down and you have to pay for a guide. The downside is the touts constantly pestering you to buy their trinkets. 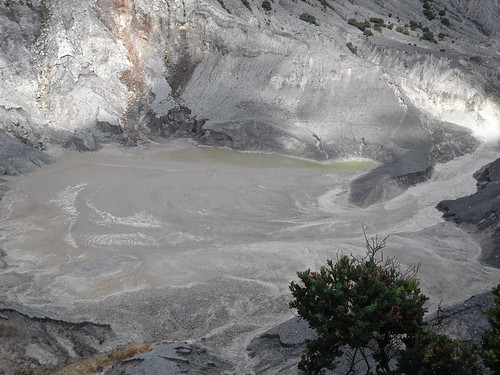 While here, you can also check the Sari Ater (or Ciater) hot springs, owned by a private resort. But not much to do other than touch the 35 degree water. 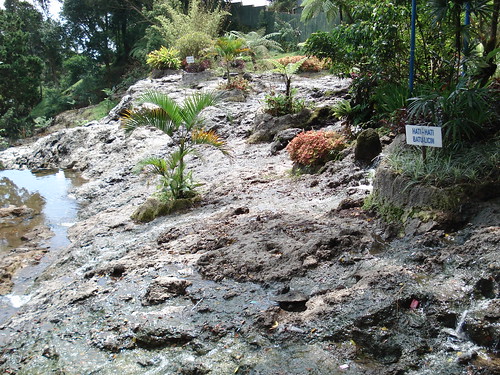 2. Kawah Putih
This is another crater in a different location, but its atop an inactive volcano. Its also cooling due to the high altitude, and i have to say to sight of the turquoise sulfur lake surrounded by grey rocks is something to behold. You can walk up close to the lake edge, but you can’t touch the water. Downside – Its a 2 hour drive here, and not much else to do. 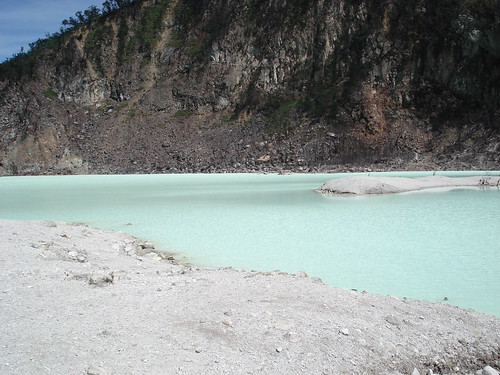 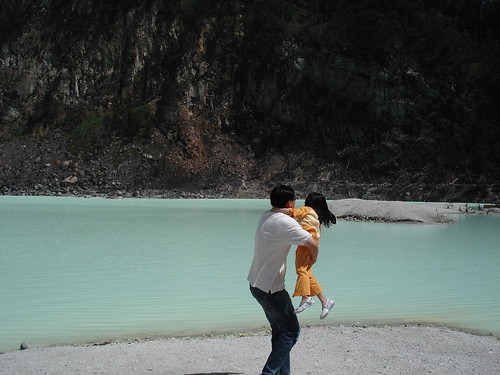 While here, you can also check out Situ Patenggang, a lake surrounded by tea plantations. You can go boating, but my wife said “its just like Taiping lake“. 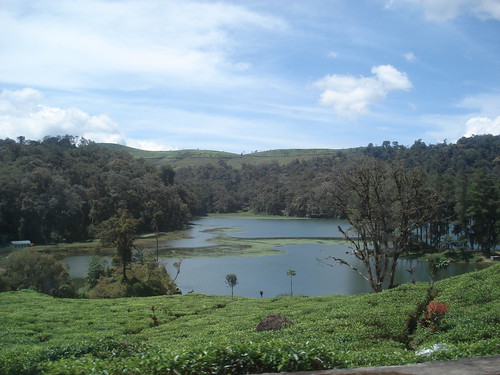 3. Saung Angklung Udjo
In the midst of the bustling narrow roads and cramped shops in the city center, there is a bamboo covered sanctuary built by the great angklung master Udjo Ngalagena to celebrate the craft and music of the humble bamboo musical instrument. 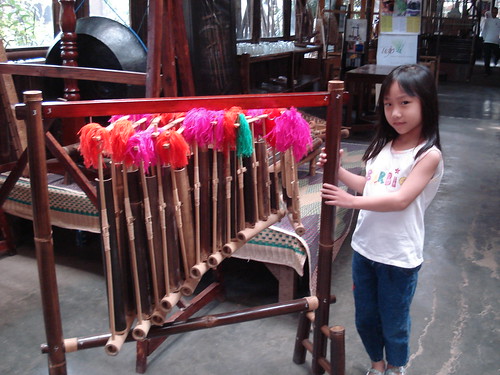 There is a theater here where you can watch a daily performance of Sundanese music, dance and culture. We only caught the rehearsal here, but the 5 year old performers are extremely talented. 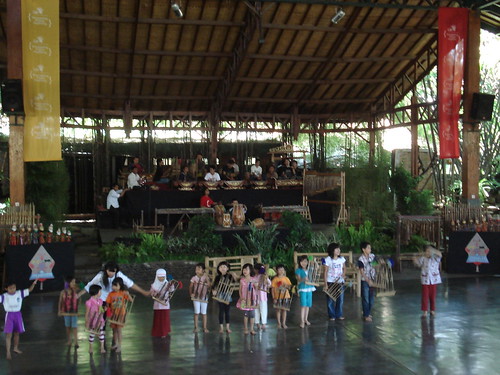 And then we have the shopping, the biggest attraction of Bandung for most Malaysians.

4. Jalan Dago / Riau
This is where most of the factory outlets sell the sisa ekspot garments. Make no mistake, its NOT like Malaysian warehouses, these are upmarket outlets beautifully decorated for you to shop in comfort. You name it, they have it – clothes, jeans, leatherware, bags, shoes, toys, but mainly clothes. And UNBELIEVEABLY cheap. 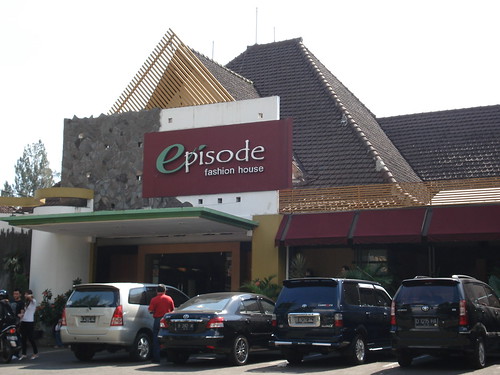 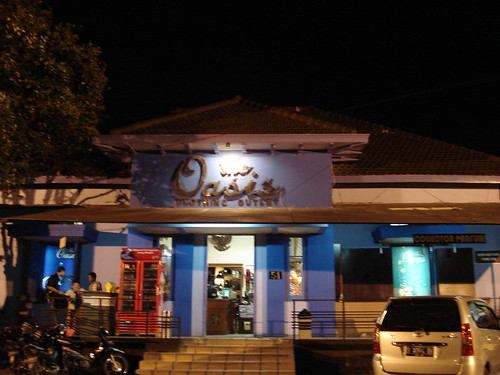 5. Rumah Mode
This is one of the outlets, but it deserves a special mention. It is the most beautiful outlet, and by far the most popular one. Rich Jakartans (and Malaysians) flock here every weekend to shop for the latest in trendy clothes and high fashion. If you only have time to go to one, I recommend this one. Downside, its in Jalan Setiabudi, far from the other outlets. 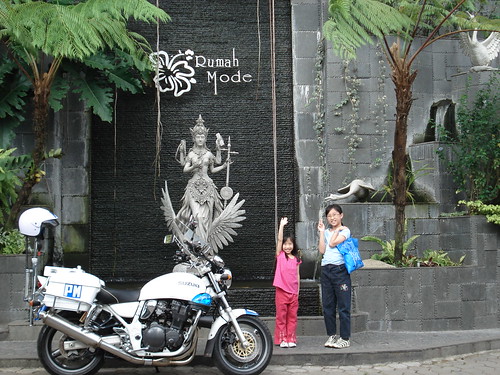 6. Jalan Cihampelas
Another street packed with outlets, but here its more catered to teenagers and kids. You can find any and every kind of jeans and tee shirts. Another feature is the statues and decor they use to attract customers. Downside, some shops sell poorer quality stuff here. 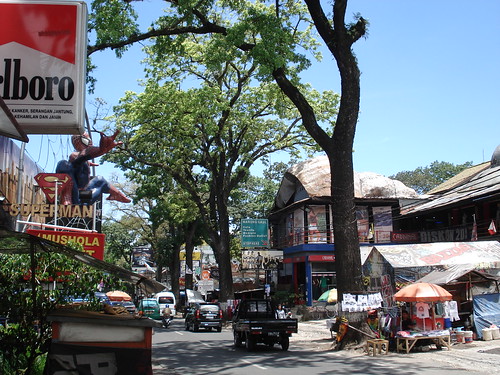 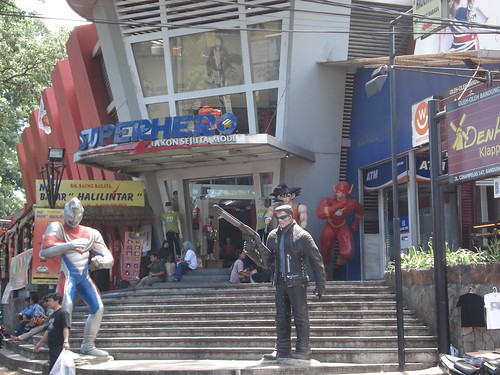 Now we move on to the fine dining and local cuisine. Fine dining in Bandung is VERY cheap, you can eat in the classiest restaurants here and the price is only half of what you’d pay for in Malaysia.

This is the Western spot best we tried. It located on the hilltop, the view is excellent especially at sunset. The food is great, but the ambience is better. It’s in the same area as other restaurants such as The View (we also tried it), the Peak and the Stone Grill. 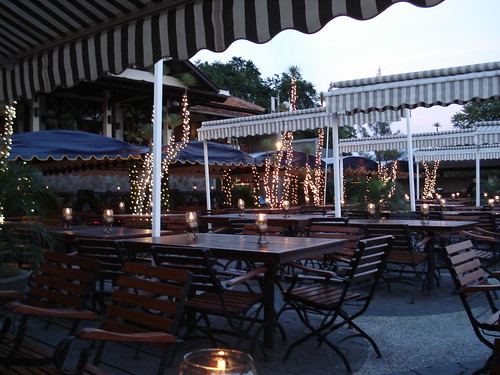 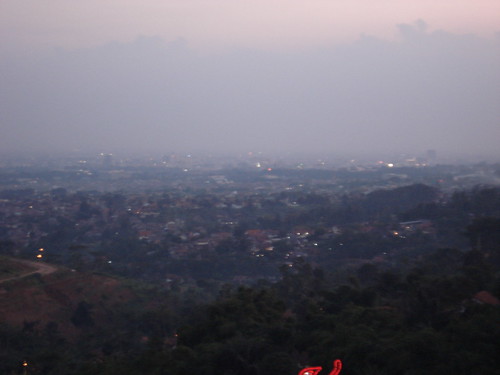 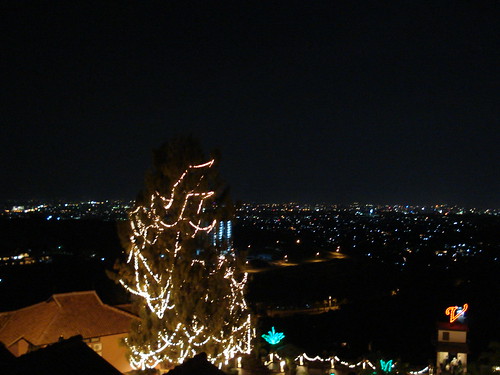 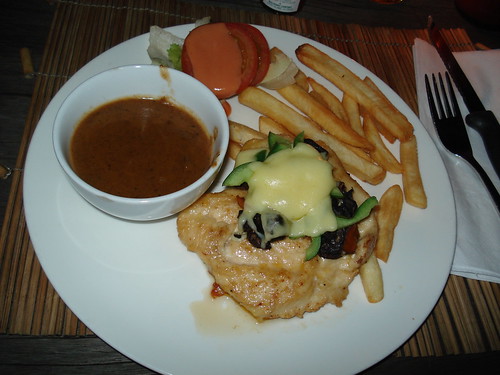 This is another must-try for anyone going to Bandung. It’s a kampung-style dining set in a cultural centre, and you get to eat in your own private hut surrounded by rockface and trees. Food is a combination of Sundanese, Western and Chinese cuisine. On the downside, its quite far from the city centre, plus I’ve read some complaints about the service. 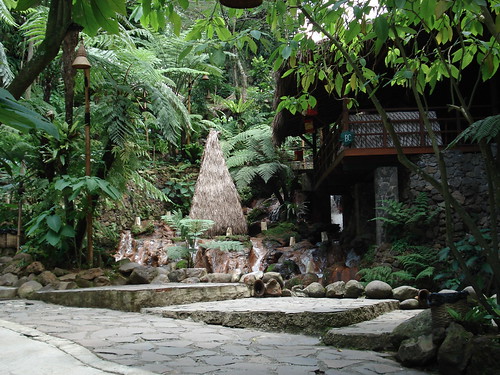 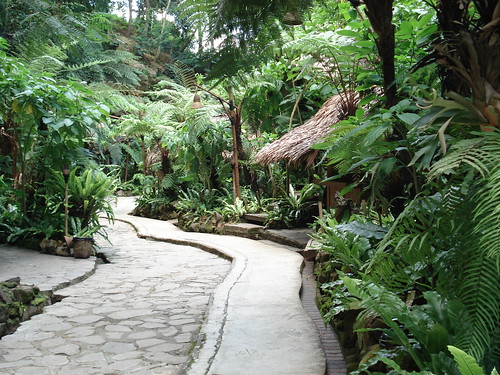 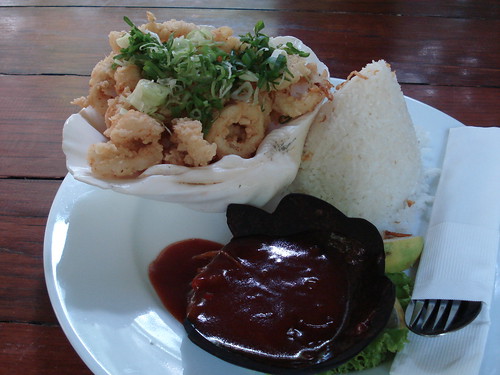 If you’re looking for the most happening Western restaurant, its at Atmosphere. Here you can eat in a hut surrounded by a pond filled with koi and gigantic Amazonian arapaima. The food is not as good as the earlier two mentioned, but the ambience is one of its kind. 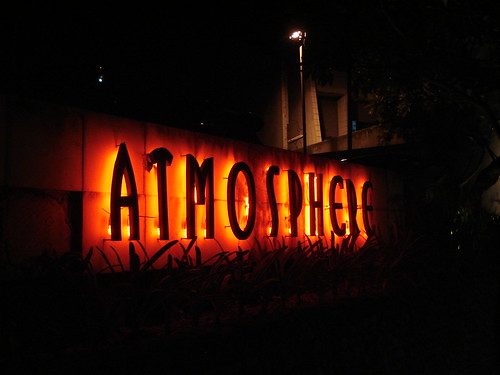 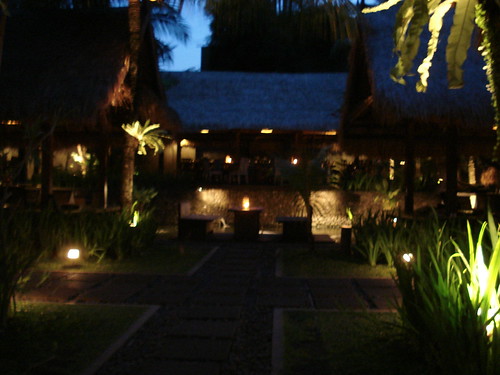 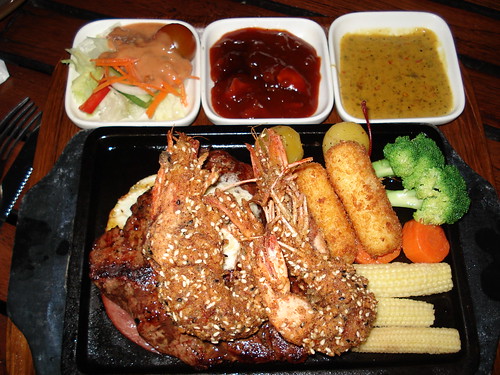 Of course, you can also try the melting pot of local cuisine, Javanese, Sundanese and Chinese. We tried the Sundanese restaurant DapurKu, it was cheap and delicious. 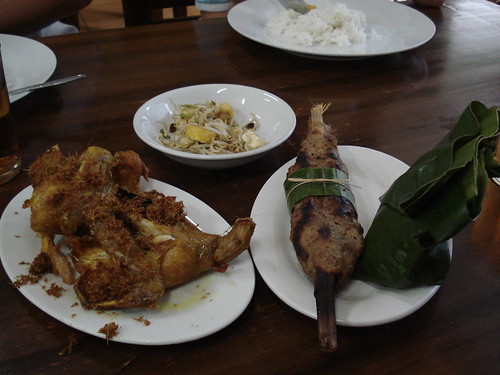 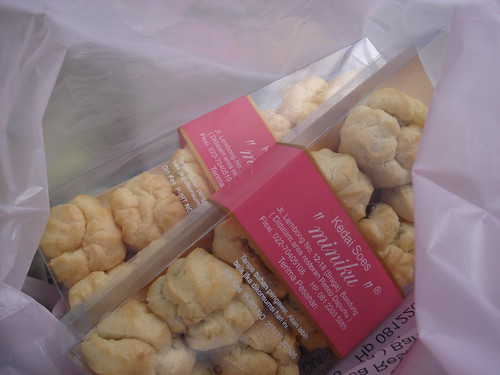 Or you can try one of the thousands of carts selling bakso and mie and other stuff, or the small nasi padang eateries at every street corner. 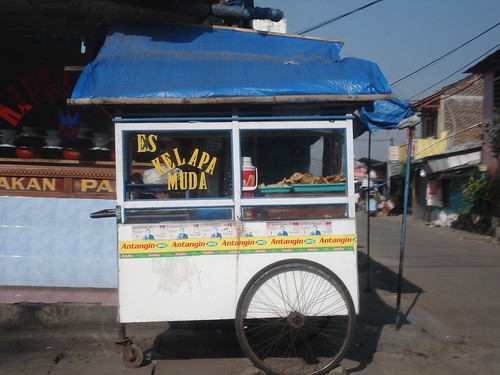 Another delicacy is the brownie kukus, which we didn’t have the opportunity to try.

Notable mentions: There were lots of other stuff we managed to cram in our 5 days there, but didn’t make the list. There are many historical sites (like Gedung Merdeka) around the city, worth a look if you are into it. Also along Jalan Braga there are lots of art galleries, and teenagers gather on weekends with cars and play music.

We had a great time in Bandung, so good we’re planning to return again, soon… 🙂