Last trip back home to my parents home was a event-filled weekend, good food, and running about a lot.

On the last night, i decided to fire up the old turntable, or record player as we called it back home. It’s been awhile since i last played it, prolly something like 5 years ago. Growing up, the record player was a fixture in our household, my parents would once in awhile play their old records from the 60’s and 70’s, and their tastes was a huge part of my musical education as kid. 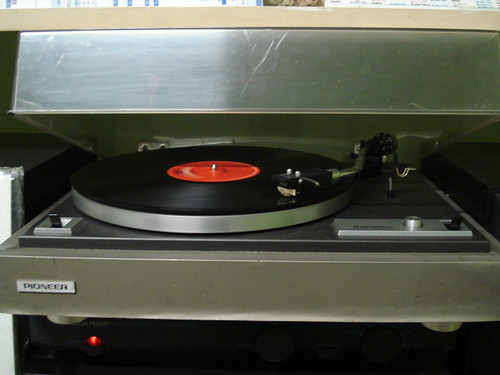 Actually this isn’t the turntable we had all along, ours was a large impressive one with tape and 8-track player, but it finally bit the dust and is now sitting outside my dad’s house in some old boxes. This particular one was actually salvaged by my mom from her friend who wanted to trash it. It’s a simple set, all we needed to do was change the needle. 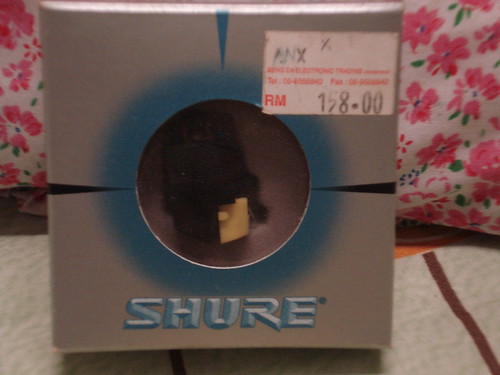 If you’ve ever owned a turntable set, you’d know that the needles are very expensive. We’ve changed quite a few before, this one cost RM150. The sound was excellent, it was hooked up to my brother’s marantz amplifier and Cambridge Audio speakers. We finally threw out the two huge box speakers, it was about 4′ high. My cat used to scratch the foam covers… 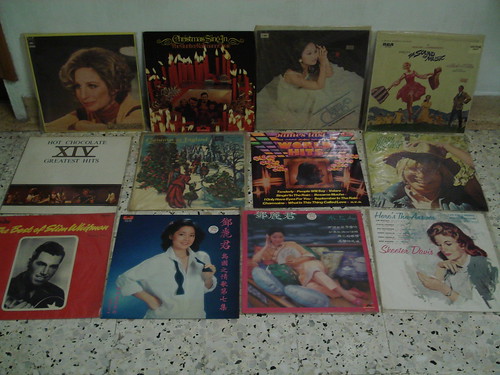 My mom and dad (and bro) collectively have over 100 records, i couldn’t get it all on one shot, so these are a few that my mom and dad likes. From the top left going right, that’s Barbra Streisand, a German Christmas album, Teresa Carpio, The Sound of Music, Hot Chocolate, another Christmas album (by a rural English church choir), some 70’s dance compilation album, John Denver, Slim Whitman, 2 of my mom’s Teresa Teng albums and Skeeter Davis.

I kinda like these two from Abba. I remember vividly that we went to watch the ABBA: The Movie at Rex Theater some time in the early 80’s, and my dad immediately brought to buy the two albums after the show. It was probably the last vinyl albums he bought. The one on the right is the soundtrack to the movie, and the one on the right was their then latest album with ‘Fernando’ on it.

I bought the Abba greatest hits on CD some years back. 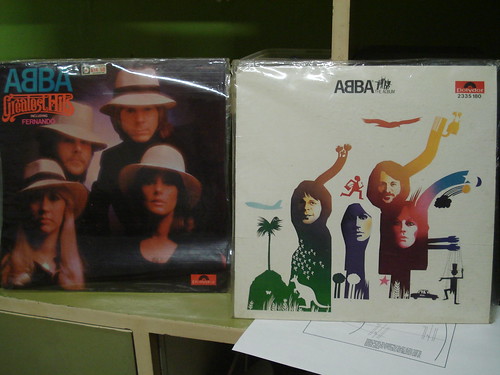 These two are my mom’s favourite english albums. Tracy Huang and Frances Yip. Both are albums where they sing cover versions of popular English hits. I love these 2 records, evergreen hits from 2 great singers. 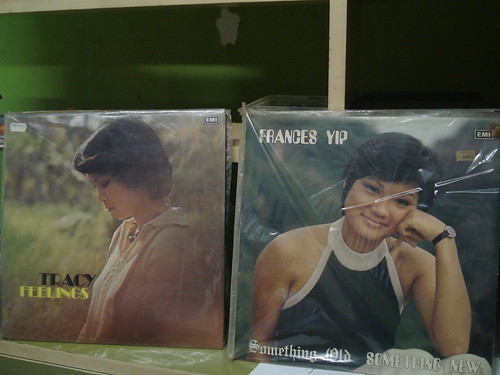 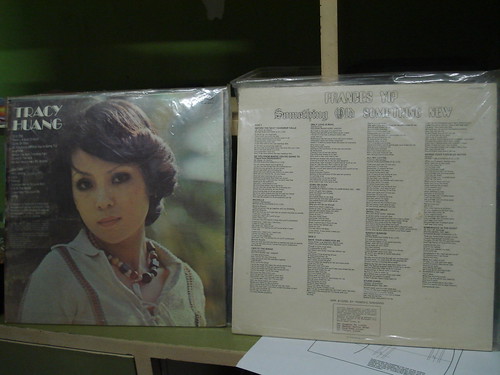 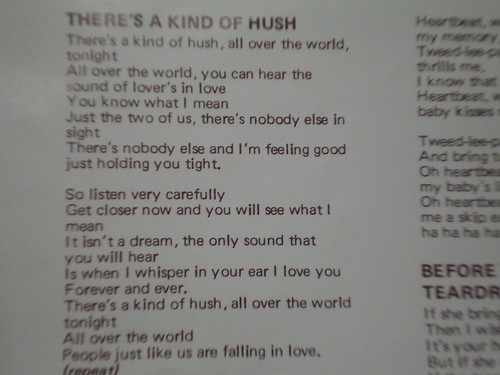 Here’s a short movie of Tracy singing Karen Carpenter’s ‘There’s a Kind of Hush’. I believe this was her first ever English album, released from Singapore.

my uncle bought this from England for my mom. 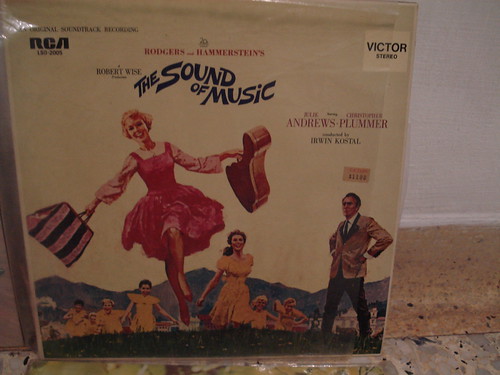 John Denver. I remember he used to host the American Music Awards… 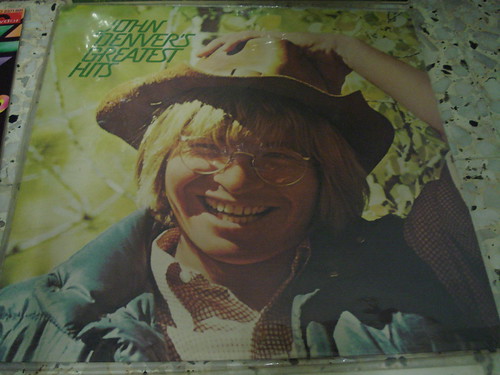 This is obviously my mom’s. Very talented singer, taken before her time. My wife can sing along to all her hits… 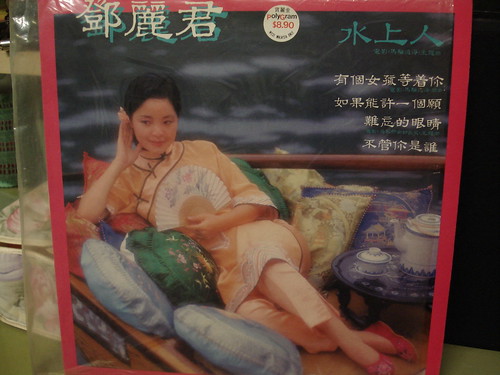 These are 45rpms, or singles as they’re usually called. Mostly are my mom’s chinese records. 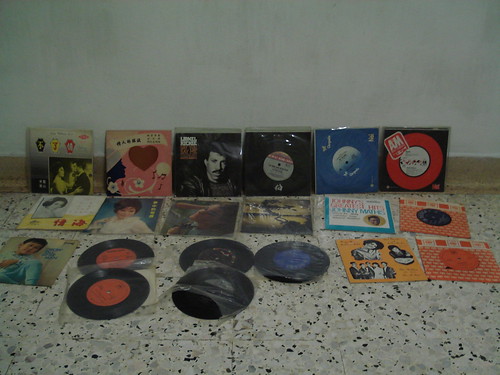 This particular 5 were brought back by my bro from Australia when we was studying there in the late 80’s. They’re Lionel Ritchie’s ‘Say You, Say Me’ (Soundtrack from the movie White Knights), Elton John’s Nikita/The Man Who Never Died, Pat Benatar’s ‘We Belong’ and Bryan Adams’ Summer of ’69 and Heaven. Singles came with a throwaway track on the B-sides. 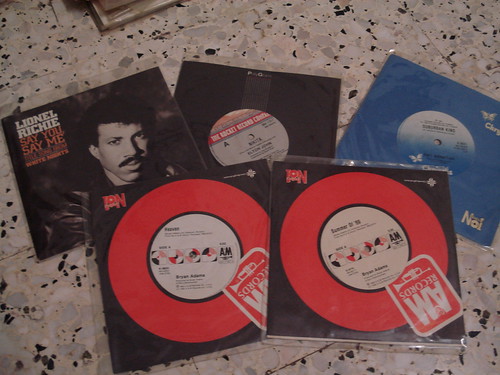 This one came with a tin of Dumex milk back in the 70’s. I bet they’ll have hoot if I sent it back to them today… 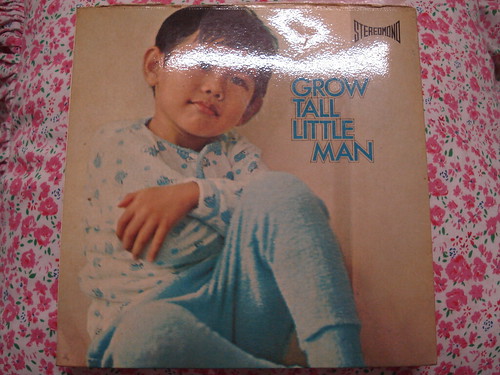 Here’s another movie of the late great Teresa Teng, on the scratchy vinyl…

I don’t know how long this record player will last, and how long my mom will keep the records. But vinyls will always hold its place in music history. The scratchy, crackling sound and the clarity is unsurpassable even in the age of hi-tech DVDs… Next trip i’ll record more movies… hopefully.