This is the continuation of yesterdayâ€™s posting. Warning, though, lots of pics. Not friendly to dial-up connection, yadda yadda yaddaâ€¦ zzzâ€¦

Anyways, so we spent a night in a hotel in Ipoh. My ex-colleague was telling me that when he stayed in a hotel in the same town some years back, some pimp will come and knock on your door in the middle of the night and ask you lasciviously, â€œOi lui mou?â€ (â€˜Want a girl?â€™) If you donâ€™t get it, heâ€™s not offering you orphaned young babies for adoption under some social service scheme.

Nope, that definitely didnâ€™t happen to us, although we were most probably stoned asleep after the long drive. Oh, wait, one more thing about this hotel: 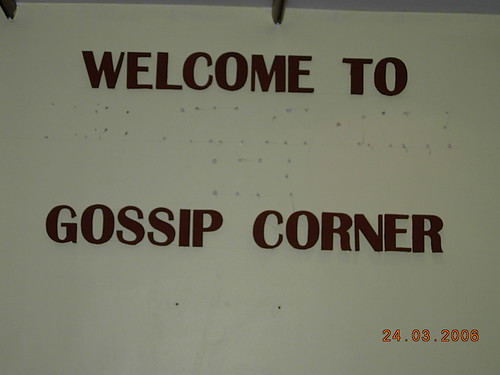 No wonder some people say Ipoh people very â€˜paatâ€™ (busybody) one. Since it is mentioned here, did you hear about that femes blogger whoâ€¦ oh, never mind.

Right. So we woke up early Friday morning to go eat dim sum.

(Side note: For those unfamiliar with Cantonese cuisine, dim sum â€“ the effervescent breakfast staple across the Chinese world. Itâ€™s actually hundreds of different varieties of pork, shrimp or chicken, steamed or fried in a numerous ways. Itâ€™s a little bit like sushi, except that its cooked, not raw. Most popular types are siew mai (steamed shrimp wrapped in thin dough), fishball, har kau (prawn dumpling) and wu kok (pork and oyster sauce wrapped in deep fried yam pastry). Dang this translation stuff is difficult. Anyways, Ipoh being the heartland of Malaysian Cantonese, has the pre-eminent dim sum restaurants in the land. Contrary to what KL folks think. End of side note.)

So we took off on the deserted streets of Ipoh New Town (Sun Kai Cheong) to Foh San restaurant. Actually, this is my second time there, my brother-in-law always takes us to Tai Thong, which incidentally, is in the hotel we stayed. The last time I went to Foh San, my goodness, it was packed to the brim. These old ladies were actually standing at the kitchen doorway to grab the food as it came out! James of Loopymeals says that Foh San is not as popular anymore, but on weekends, its like the Hari Raya open house at the Prime Ministerâ€™s residence. 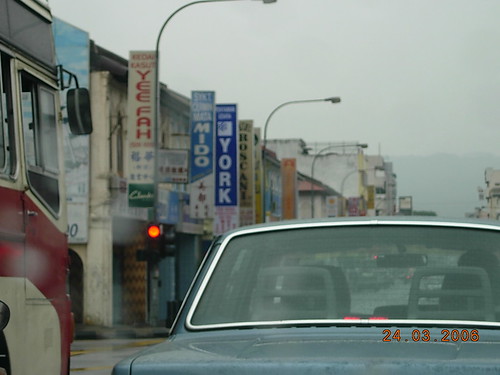 Foh San was actually only half empty, since it was quite early. Dim sum was excellent, I didnâ€™t manage to get a good shot of the food, it disappeared as soon as it hit the table. But I did get this shot of the teapot. Yes, the teapot. 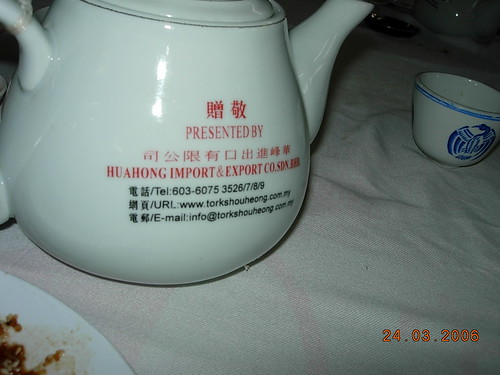 Get this, the Chinese teapot manufacturer has their own website. I bet their company blog should be launching soon. (â€œWeâ€™re launching this new line of Japanese themed pots with flowery motifs, Iâ€™m very sure itâ€™ll do wellâ€¦â€)

After dim sum, it was more foodâ€¦ it was down to Old Town for some authentic white coffee, and roti bakar. 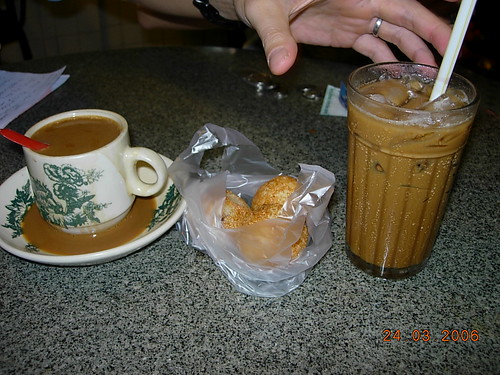 Some of us thought the food was heavenly, apparently, judging from the reaction. 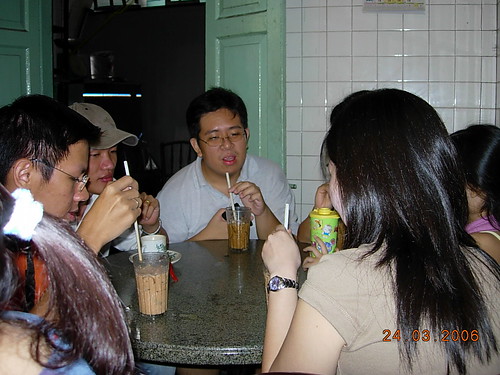 On the way there, I saw this. Hah, they named it after you, Pat! 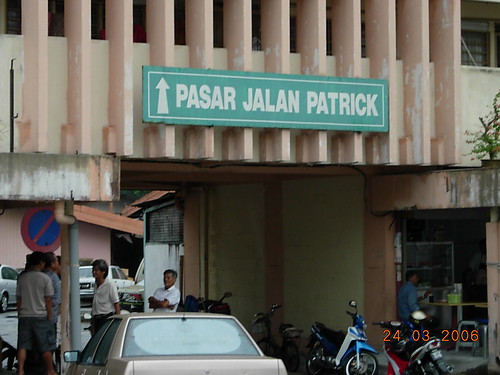 Anyway, after spending like an hour at those old fashion toy shops in town (where they stock up on every imaginable toy from your childhood), we set off on the road again. It drizzled all the way after a night of heavy showers, so the weather was cooling and dream-like. 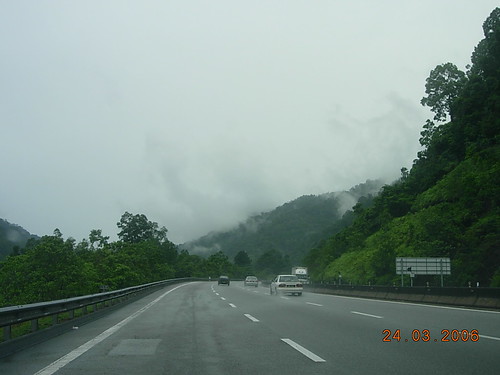 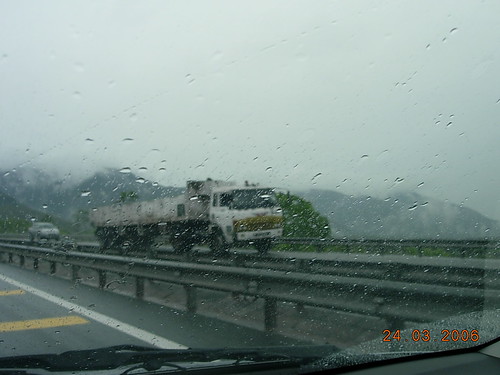 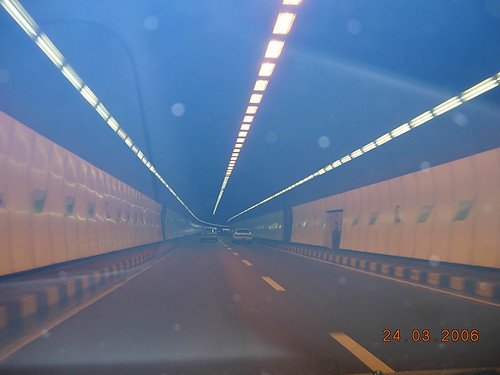 We stopped at the Dataran Sg. Perak rest area for a toilet break. I remember this place had a lot of local fruit stalls, but there seem to be less this time around. Maybe its not in season yet. 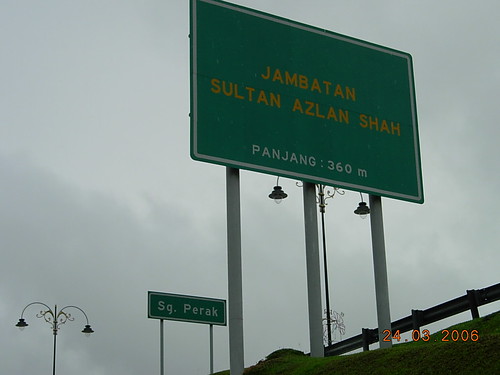 Yep, this was the river that was responsible for at least 3 chapters of our Form 2 History textbooks.

(Cue another sidenote: In the 16th to 19th century, travel in the Malaya Peninsula was restricted to jungle trekking and via the rivers on a wooden boat. This particular river, was an important artery for transporting goods and exports like tin ore, rubber, spices, pirated DVDs, et al. Three warring sultanates resided along this river, up until after the arrival of the British bringing colonialism and Premier League footie along with them. For further reading, check out the Pangkor Treaty of 1874 and other related stories. End of yet another pointless side note.)

Anyway, this is one of our friends too engrossed in the Chinese papers. Yes, thatâ€™s me in the reflection. 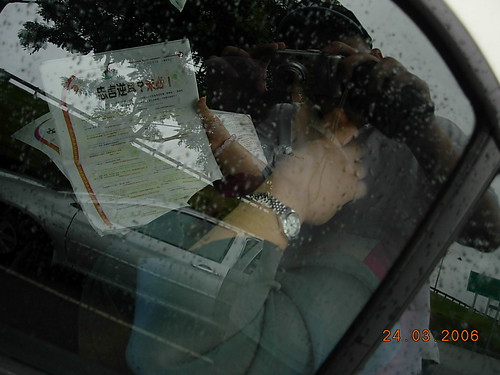 After a short break, it was the open road againâ€¦ along the way, we passed what my wife called the â€˜fire mountainâ€™. With the mist and red earth, it really looks like the mountain is in flames, doesnâ€™t it? 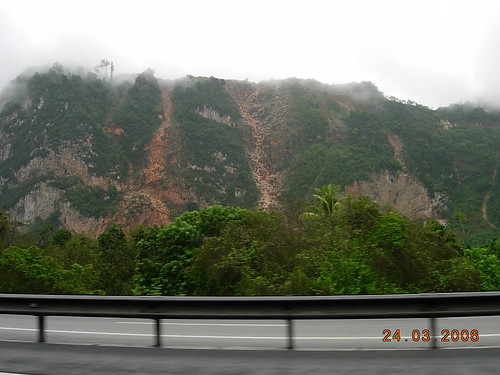 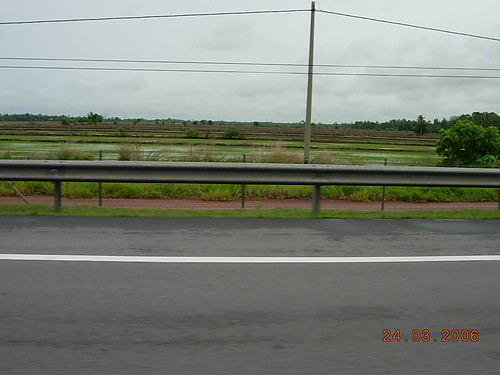 (Oh no, not another side note: Rice, the staple diet of most Asians, was aggressively cultivated in the Malaya Peninsula for many centuries. These days, most of our rice is imported from Thailand as our paddy fields are slowly converted into housing estates or other more lucrative cash crops. Whatever rice we produce is probably used to make nasi lemak, pulut and the occasional lemang. End of this side note.)

Next: Journey to the North Part 3 â€“ Pearl of the Orientâ€¦