For Valentine’s Day, I bought my wife a surprise trip she’d never expect in a million years – 6 days in Lombok! Why Lombok? Why not Bali? Where’s Lombok?! Those were the questions I was asked by my friends and colleagues. Well, we did a few mainstream tourist destinations recently in the past few years, like Bali, Gold Coast and Bangkok. I thought it would be a good change to do one a little less ‘touristy’ – a bit off the beaten path. Ever since we’ve been doing annual family holidays since 2006 (I think), the ones we enjoyed the most were the more obscure destinations, like Ko Lipe (when was that? 2011? I can’t even remember without checking the photos).

Anyway, it was during the research for the Bali trip in 2009 (can’t remember for sure again) that I read about Lombok, the island just next to Bali. Known as the ‘the undiscovered Bali’, I think Wikitravel sums it up the best:

Located just east of Bali, Lombok in many ways lives up to or exceeds the promotional term, “an unspoiled Bali”. With beautiful beaches, enchanting waterfalls, the large, looming volcano of Mount Rinjani combined with relatively few tourists, Lombok is indeed the paradisaical tropical island that many people still mistakenly imagine Bali to be now.

Well, its not exactly ‘undiscovered’ or ‘unspoiled’, but I like to think of it as Bali was 40 years ago, before mass tourism hit the island in a big way. Although its only a 45 minutes boat ride from Bali, there are several marked differences in the culture and geography of the two islands. For one, the indigenous people of Lombok, the Sasak, are predominantly Muslim as opposed to the Hindu of Bali. However, there are Hindus on the island, along with temples, remnant of when Bali ruled this island a long time ago. There are many other important differences, we will see them over the course of this travelogue.

So with a little help from Sasha (who was here just recently) and a lot of help from TripAdvisor and the Internet, it was off to Lombok.

Anyway, last Tuesday AirAsia brought us to Lombok’s new airport located in Praya, on the south of the island. Its a 3 hour flight from KL. 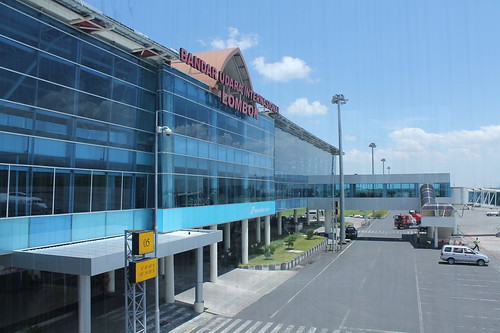 The old airport was conveniently in the capital city of Mataram, this new one is a little out of the way from all the places tourists might want to go. Aside from a handful of Mat Salleh tourists and a few Malaysian families on school holiday, the flight was full of local Lombok folk coming back from working in Malaysia. Later our taxi driver told us that everyday, hundreds of Lombok men return from work in Malaysia, and hundreds more to work in Malaysia.

Although the airport is new, they aren’t really prepared to handle big crowds. Only 3 counters were open, serving one common line, which included locals and foreigners.

If I thought inside the airport was a little disorganized, outside was almost chaotic. Hundreds of families clogged the entrances, either sending off or receiving family members. Everyday its like this, my taxi driver said. 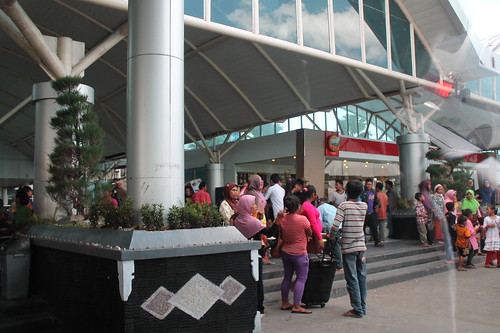 Speaking of driver, I was approached by a few guys, it instantly hit me and my wife we didn’t do any research on taxis… but I went with this local guy who could speak ‘Malaysian-Indonesian’ – you know, like how the Indonesians here in Malaysia have learnt to adjust their accents and vocab a little to be better understood by Malaysians. Anyway this guy Dzul later told me he spent many years working in Klang and KL, so it figures. Dzul turned out to be a great pick, we actually used him (and his assistant) on all the days we were on Lombok. Anyway the trip from airport to our hotel in Senggigi cost IDR225,000.

Immediately after leaving the airport, all you can see are paddy fields, and empty fields with tall coconut trees. There are hardly any buildings, except near tiny villages, and even fewer shops. There were hardly any cars on the roads, just a few bikes and cidomos (horse drawn taxis, very popular here). In fact, our driver had a habit of driving in the centre of the dual carriageway. 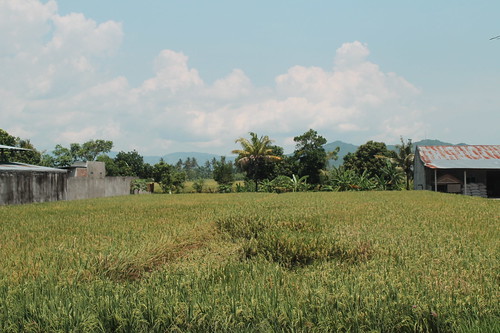 The capital city Mataram has a little bustle, but not really much either. Reminds me of a small town in rural Perak, very low density but spread out larger. No traffic jams, no speeding cars, no loud honking. Everyone takes it easy.

After leaving Mataram and moving on the coastline to the north, we approach the beach strip of Senggigi. 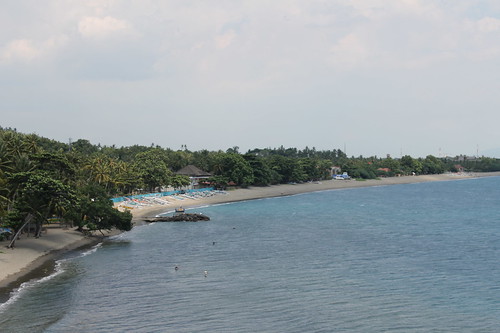 The beaches in Senggigi have beautiful vistas from the many seaside cliffs, but the sand is black. the beaches in the south are more appealing with their unique grainy or powdery sand.

For the first 2 nights of our stay in Lombok, we stayed at Kebun Villas & Resort. Its not a beachside resort, since we figured the pool would be more suited to my kids.

Its actually a rather small resort, but like its name, its built around a garden / landscaped concept. EVERYTHING is surrounded by greenery – my Landscape Architect colleagues would love it here. 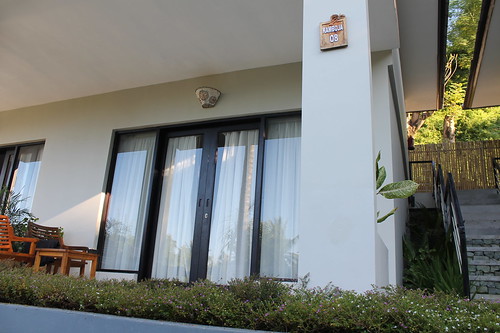 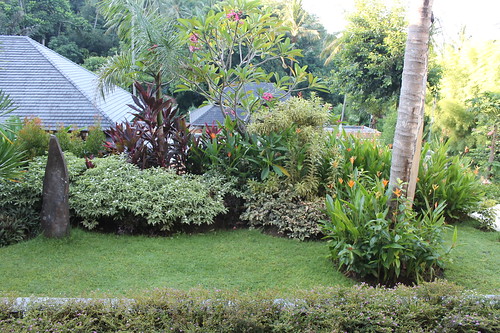 The rooms are simple, all facing greenery and the pool. 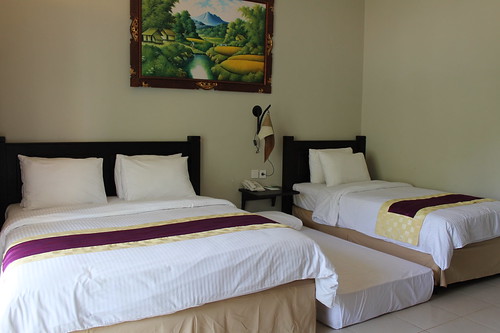 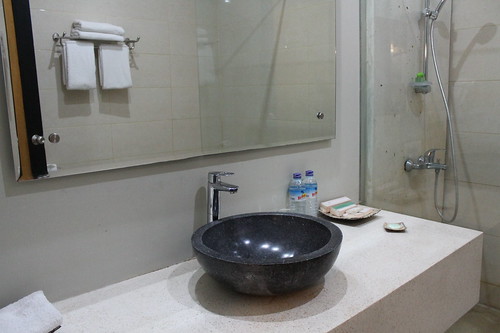 The thing that drawn us to this place was the 2 pools. One is a small pool next to the restaurant. The other was a 70m pool and is simply stunning. 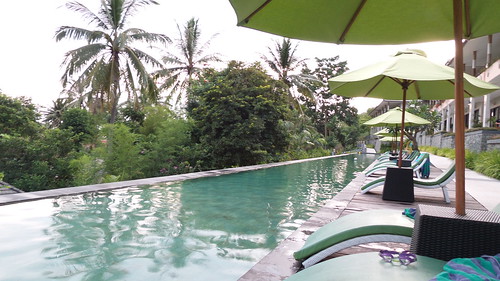 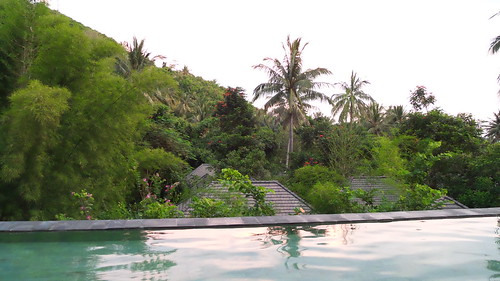 Anyway after checking in it was kinda late and since there were no restaurants around our hotel, we ate in the hotel. 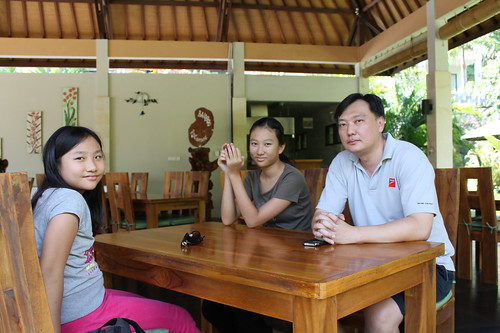 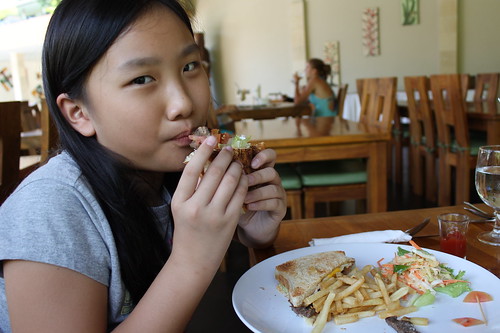 After that was an afternoon in the pool and sleeping it off.

For dinner we took a cab to Senggigi town (IDR 30,000, rather overpriced) at Big Papa’s cafÃ©. Its a Chinese owned placed that we really liked. 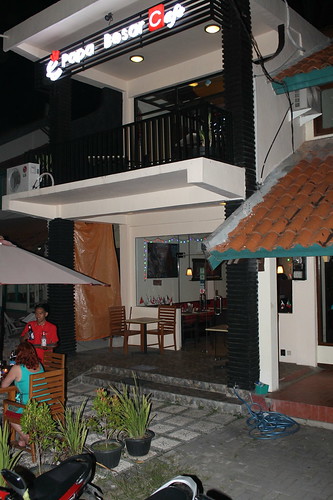 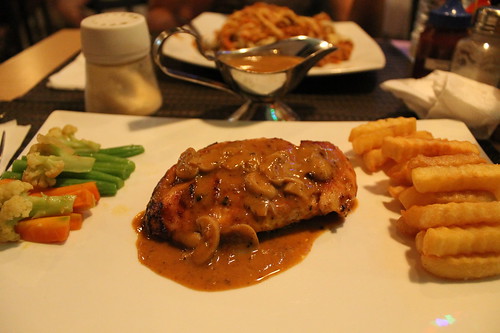 After dinner we walked back to the Art Market (nothing much to see) and then back to hotel, taking some night shots. 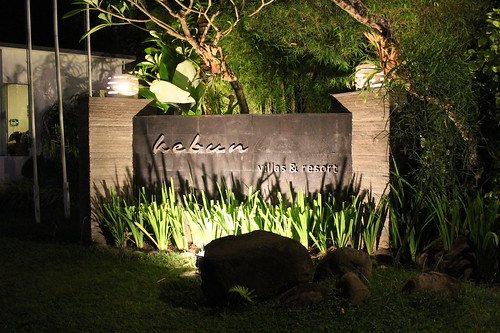 (This is the other pool next to restaurant) 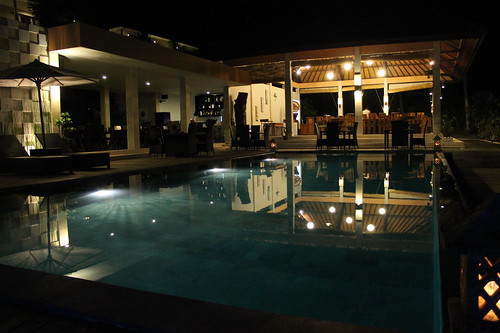 Next: Day trip around the island.