The initial plan was to do a year-end Melbourne & Sydney road trip, maybe 9 or 10 days doing a slow drive across the countryside in the late spring. But due to some financial commitments, plans were shelved and then changed. It then became a Hari Raya holiday, since it was the only time I could get off work. The thing about August – its probably one of the worst time to go vacation, second only to the New Year super-peak. If it isn’t typhoon season (Hong Kong, Macau, Maldives), its the biting cold and wet (Perth) or its the hottest month (Saigon, Hanoi). And with it being Eidul-Fitr, Muslim majority areas are out (most of Indonesia, Lombok, Phuket, Krabi).

Which leaves either Bali or Bangkok. Since we did Bali recently, we went with Krungthep, the city of Angels, aka Bangkok.

We touched down in Don Muang on the Thursday, first day of Raya. It was a normal working day in the city, weather was overcast and cool. August is one of the rainy months, but in our 6 days here, we were thankful the rains only came late at night or pre-dawn, which worked well for us.

Airport limo cost us THB700. Being a family of four including a kid and teenager, our transport preferences may differ from backpackers. Traffic was good, until we reached the the junction of Petchaburi-Asok road. Our hotel was on Asok road in Sukhumvit, clearing that short queue at the traffic lights took almost 20 minutes, since Sukhumvit road was jammed all the way. 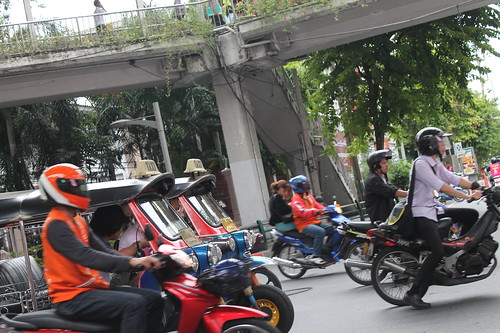 Anyways, hotel is Asoke Residence, a small, new 4-star hotel which we were very impressed with. For RM400 a night, we got a 1,200sqft apartment with 2 large rooms, living room and full kitchen facilities. In fact the master bedroom is a separate adjoining room with separate kitchen facilities by itself. The hotel had a shaded pool and free breakfast. 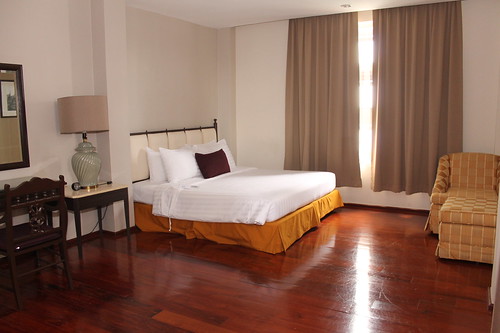 (master bedroom bigger than mine at home!) 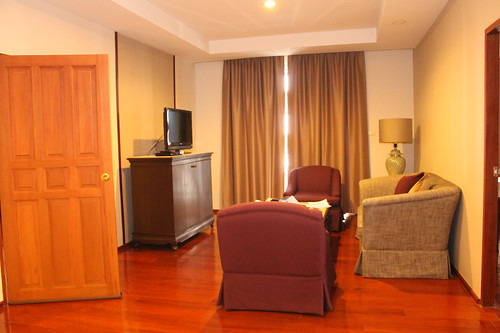 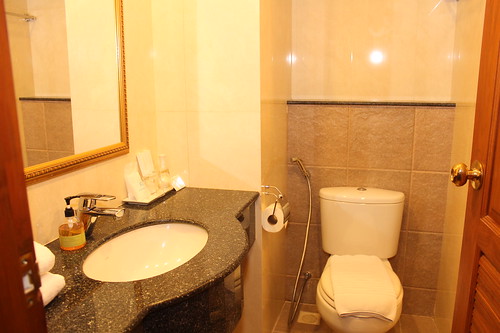 After unpacking, we took a short 5 min walk to Petchaburi MRT and went to Asiatique for dinner.

Getting to Asiatique is easy. You disembark at Saphan Taksin BTS (we had to change from MRT to BTS) and walk down the pier. There was a long line for the free boat transfer to Asiatique a short distance downstream. If you preferred not to wait for the free transfer, you could board the Chao Phraya river taxi for about THB15 (RM1.50). Though the free transfer queue was long, it moved very fast cos the boat can fit a lot of people. 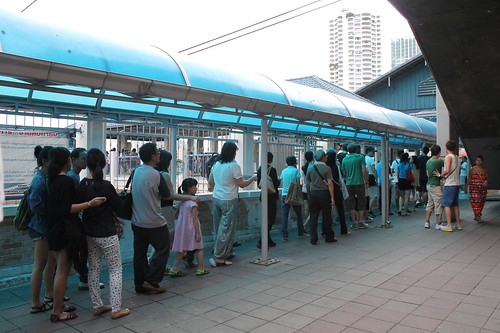 (long queue to board the free transfer) 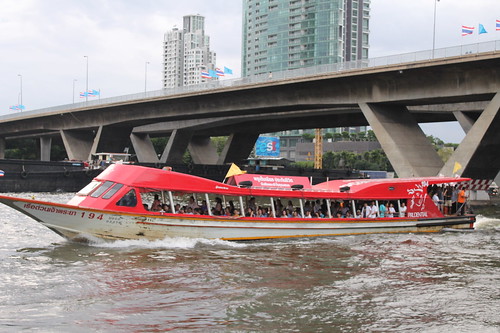 (this is the Asiatique free transfer, there was only one but it filled up quite a bit) 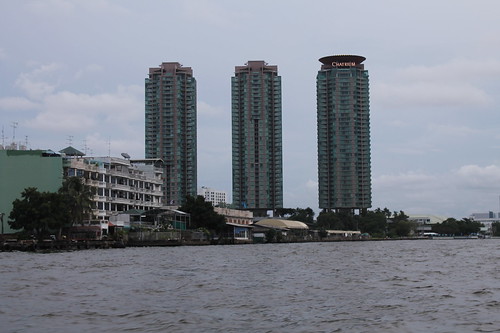 (scenic view of Chao Phraya riverside as we cruised along) 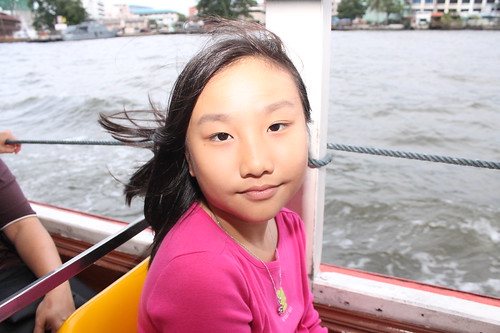 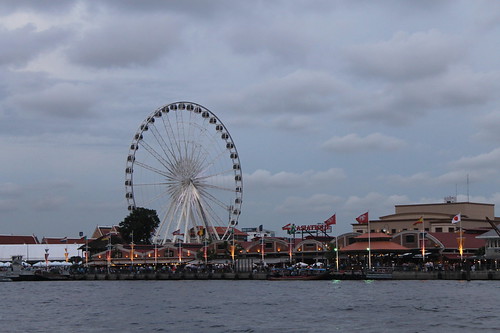 (Asiatique with the ferris wheel) 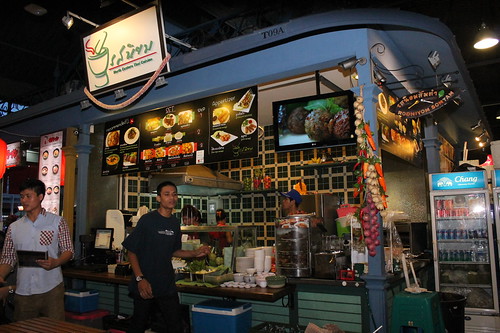 We chose this one. Food was quite good, but the coconut wasn’t cold. Food in Asiatique is on the pricey side, this one cost us about THB648 for 4 people. 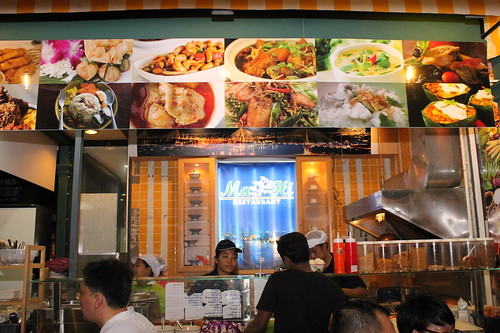 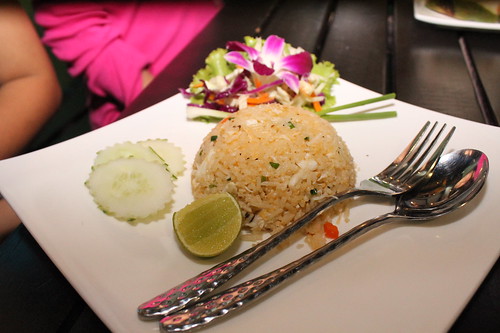 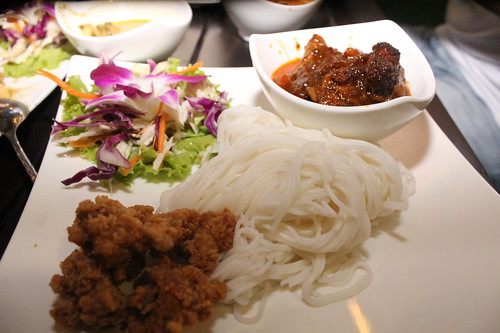 After dinner we walked around the shops a bit. 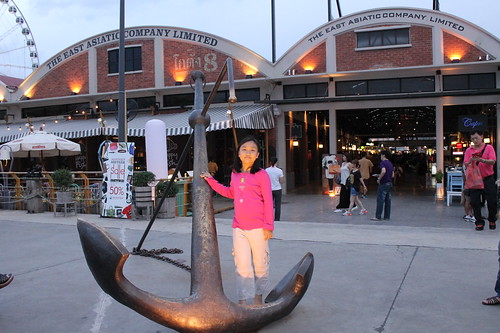 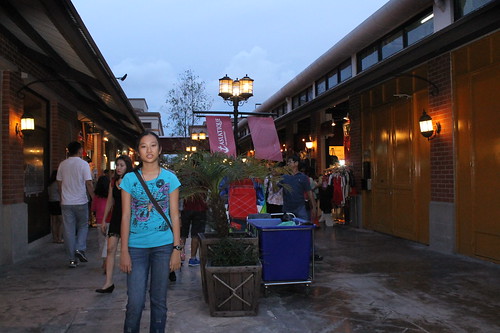 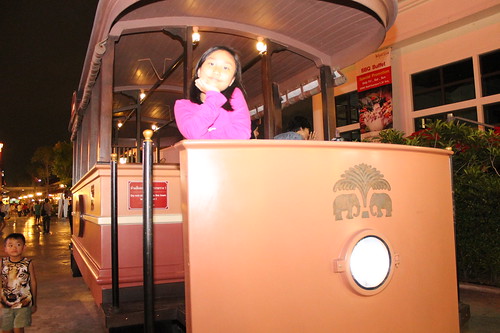 There was a long fireworks display, presumably for the Queen’s birthday on Monday. 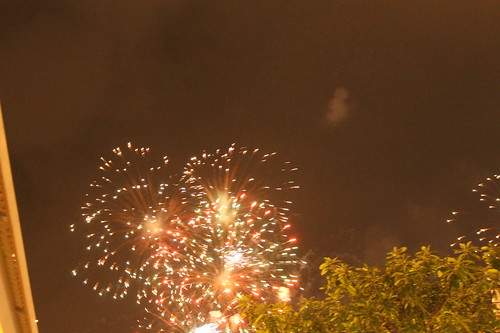 There were street artist performing for tips, like the ones in London tube stations. 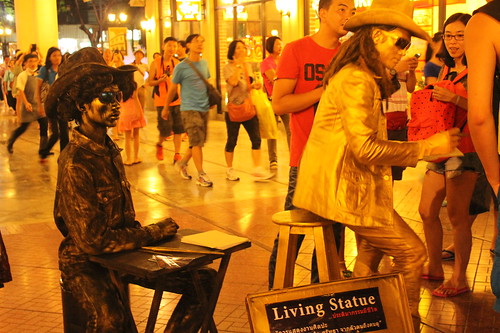 (this living statue also did caricatures for you)

Stalls in Asiatique sold mainly clothes and souvenirs, however I had a long day and wasn’t really in the mood for shopping. So we stayed a little longer and then took a cab back to the hotel. the streets were still heavy with traffic on account of it being a working day, our cab cost us THB300 flat rate, which is reasonable compared to taking the BTS/MRT.

Back in the hotel, I booked a tour to Damnoen Saduak floating market for tomorrow via the hotel. I took an early night, while my kids discovered the wonders of Fox Movies on the hotel telly. This channel would be a great source of entertainment for us every night, since we slept quite late with our bodies on Malaysian time. So ends Day 1, it would be a long, long 6 days in Bangkok…