(This is part of an ongoing travelogue. To start at the first post, go here)

Day Four! Times passes really fast when you’re on vacation. No plans today except swim and relax the whole day. But also wanted to try kayaking. The last time i kayaked was probably in Perhentian, more than 15 years ago? 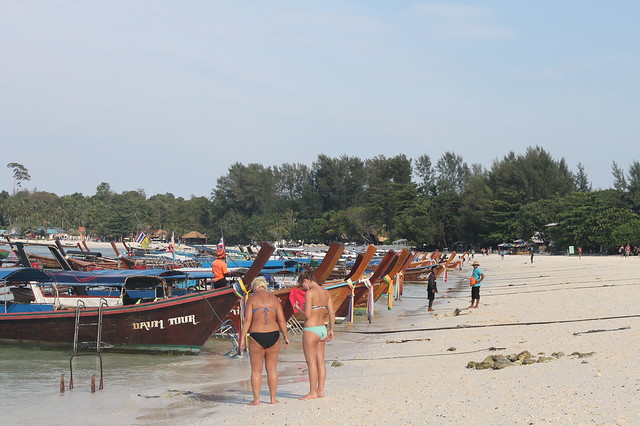 First things first. Hannah jumped into the water. She met the same Thai kid from our island hopping yesterday. 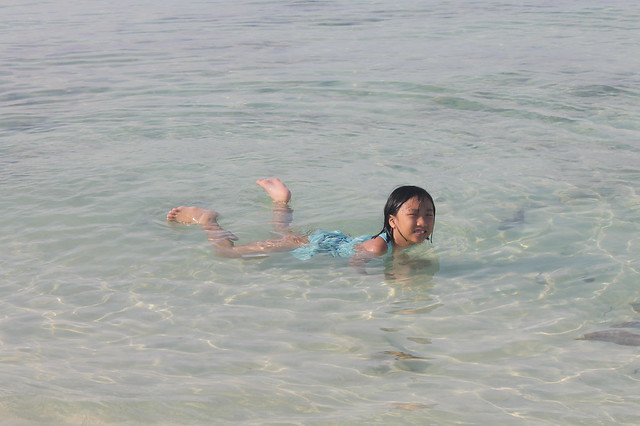 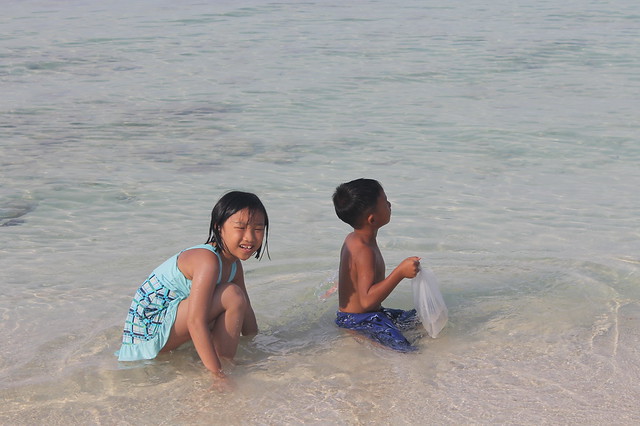 Alyssa didn’t go swimming. She was camerawoman and spent most of the time lying on the deck chair.

This is our kayak. Doesn’t look very safe, leh. Anyways for RM20 an hour, or RM60 for the entire day, you can kayak all around the island. Obviously, the 2 of us aren’t going to make it around the entire island (apparently you can do it in 1.5 to 2 hours). But we decided to try to go as far as we could anyway. 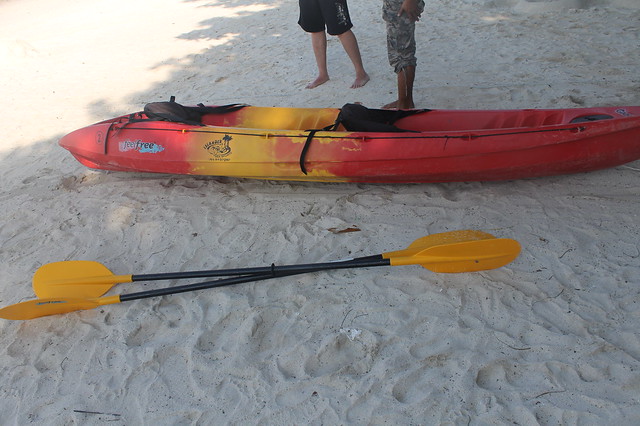 Thats us setting off from Pattaya Beach. We reckon it would be easier to go towards Sunset Beach first. 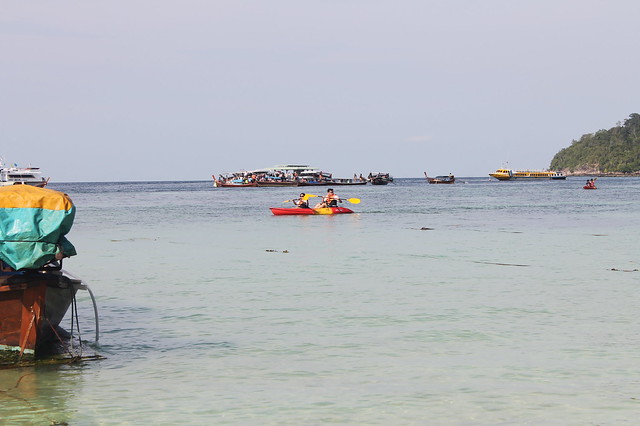 Man, it was tough. Firstly, going west, we were paddling against the current. Secondly, about 30 minutes in, we realized we didn’t bring water to drink. We made it as far as Serendipity Resort at the very tip of Sunset Beach (at least we can say we MADE it to Sunset Beach, haha). We had to go ashore and ask the nice guy at the restaurant for a free cold drink (we didn’t bring money). By the way, Serendipity is an awesome resort with their own private beach. Stay here, if you can afford it!

After that WY took the kids kayaking. Only one person was actually doing the paddling. 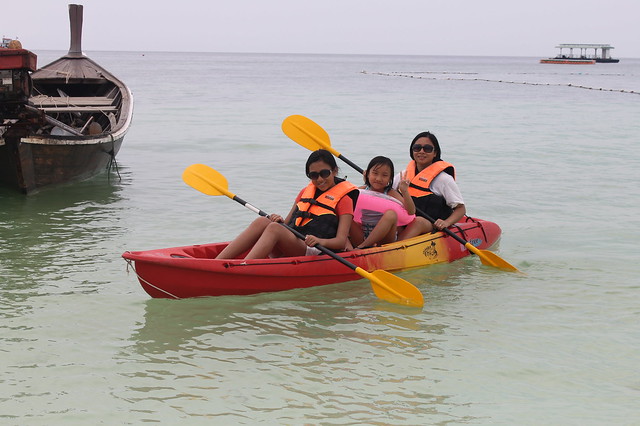 After the strenuous morning, we went around looking for lunch in the blazing heat. Someone wanted to eat burgers, so we went to Spidermonkey, recommended by some websites. 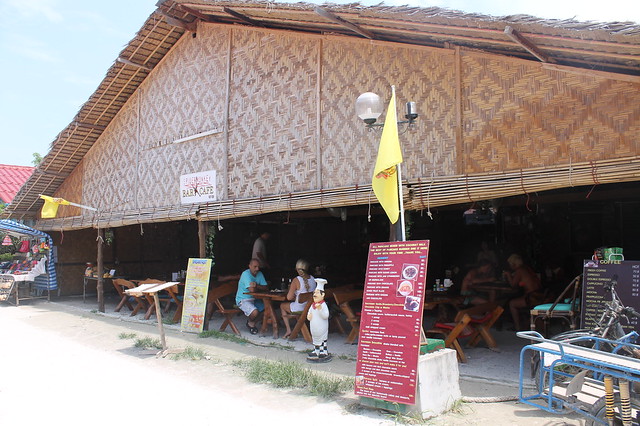 Turned out to be a huge disappointment. The place was steaming hot, and flies kept attacking our food. Plus the burgers were dry. 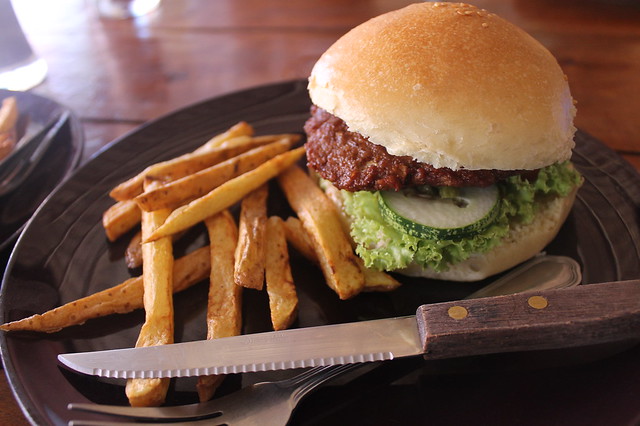 Man, we should have gone to Elephant Books across the road. Its this cafe where you can also exchange old books and play guitar with the staff who can also teach you Thai songs. Well, anyway, lesson learnt. Avoid Spidermonkey.

Then a slow walk back to the resort, including a short visit to the convenience store to get ice cream. It was a hot day, okay? 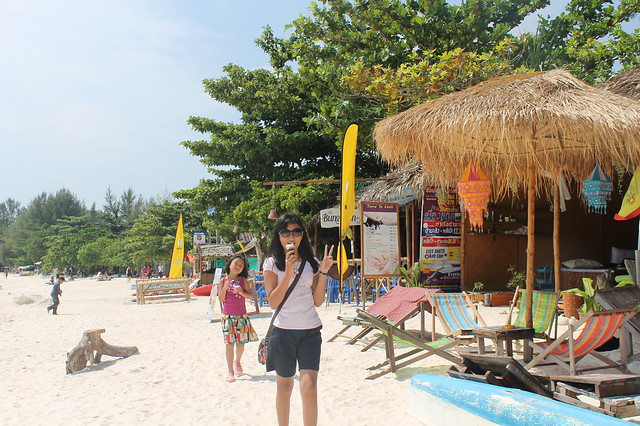 In the evenings the bars and restaurants layout these mats and divans on the beach. At night, patrons like to lie down on the mats while enjoying beers and finger food, with reggae or dance music blasting from the restaurants. Kinda relaxing. Didn’t try it, too. I’m kinda adverse to feeding mosquitoes. 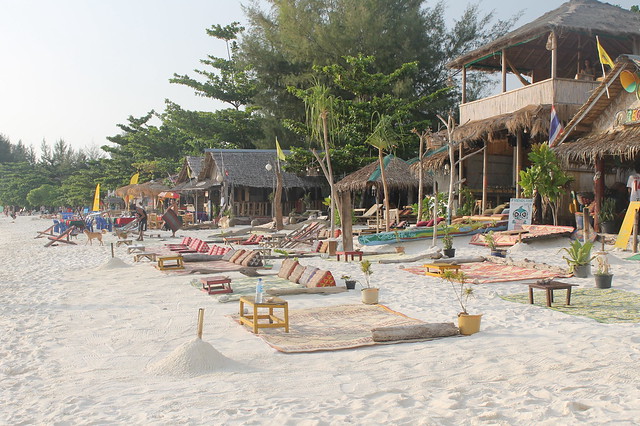 We spent the rest of the day dozing off. Just before sunset, we took a long walk to the last beach yet to be explored, Sunset Beach on the western end of the island. It was quite a distance to walk, plus with my sunburnt feet, we decided to hire a ‘taxi’. It’s really a three wheel motorcycle with and attached seating area at the side, the kind of like the ones Germans used during the Second World War (without the attached machine gun, of course). For 100baht, it saved us half an hour of walking.

Sunset Beach is very secluded, with only about 2 or 3 resorts there. It was a good thing we took a taxi there, the turning off into the beach is really tough to spot, especially when it gets dark. 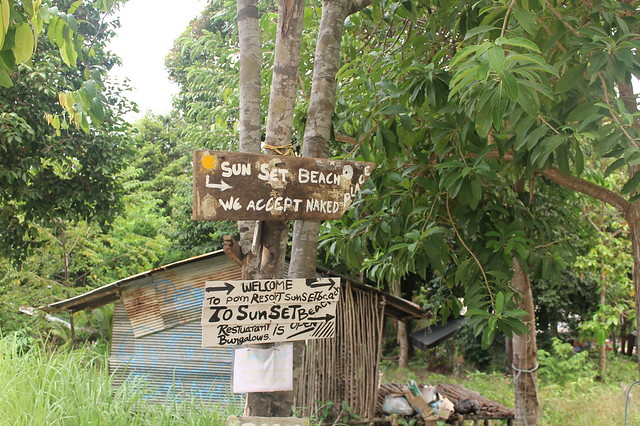 Unfortunately, no nude sunbathers were spotted. 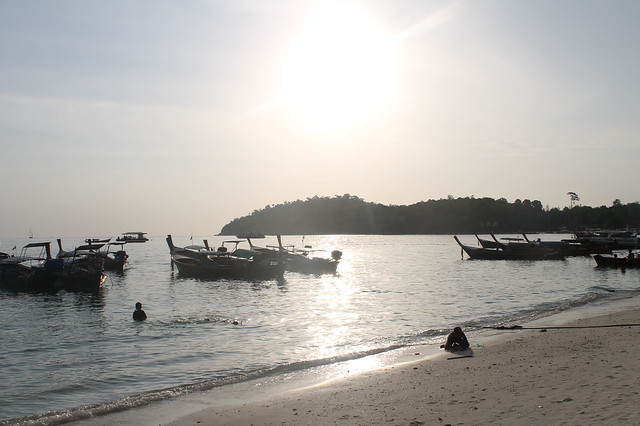 Sunset Beach, though, lives up to its name. Beautiful sunset. 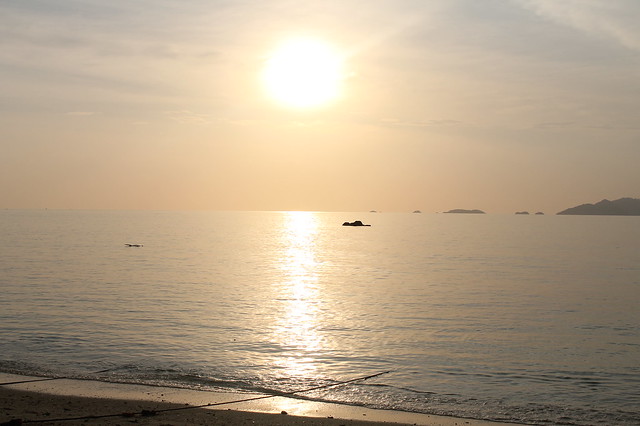 At the end of the beach is a rocky outcrop that separates a private beach and summer palace owned by the Princess of Thailand. 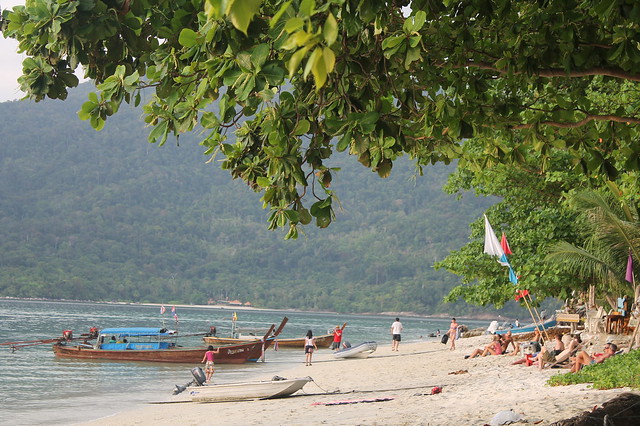 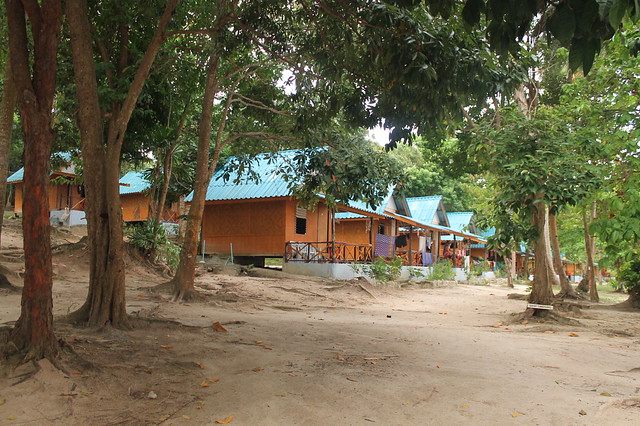 This is one of the bigger resorts here. We had wanted to have dinner here, since reviewers raved about their grilled fish. But it looked a little too kampung styled for us, so we decided to walk back to main road to catch another taxi back to Walking Street. 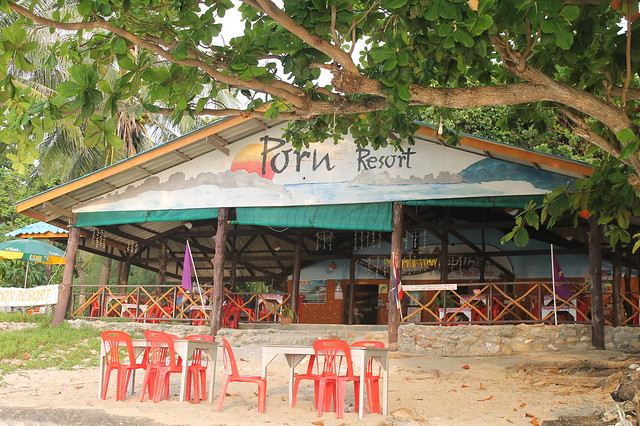 Unfortunately, we encountered 2 problems. First, there didn’t seem to be any taxis plying Sunset Beach at that hour. Secondly, it had started to drizzle! Usually, my family doesn’t mind braving heavy rains, but unfortunately we were carrying a camera (without the bag) and I couldn’t run with my burnt feet… so, my wife ran back to Walking Street, while i speedwalked. The kids mostly complained.

It wasn’t all that heavy, but we went in the first okay-looking restaurant we saw. It happened to be a little Spanish tapas restaurant called The Box. Thing we a little pricey there and being a tapas place, they had small portion. So we just had some cold drinks and tried some of their tapas, while waiting for the rain to stop. 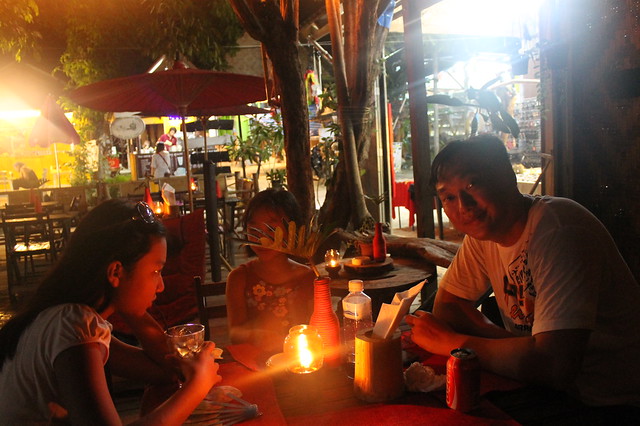 After the light dinner we went to try this pizza stall called La Italia that only did take away. Some websites called it the best woodfired pizza in Lipe, but while it was good, i thought La Luna was still far superior. But it was interest to walk along the street eating this pizza slice like the Americans do. Being our last night in Lipe, we spent some time shopping for some tees and souveniers.

That night we walked out on the beach since it was cool after the rain. The beach side bars were in full swing, there was even a fire dancer. 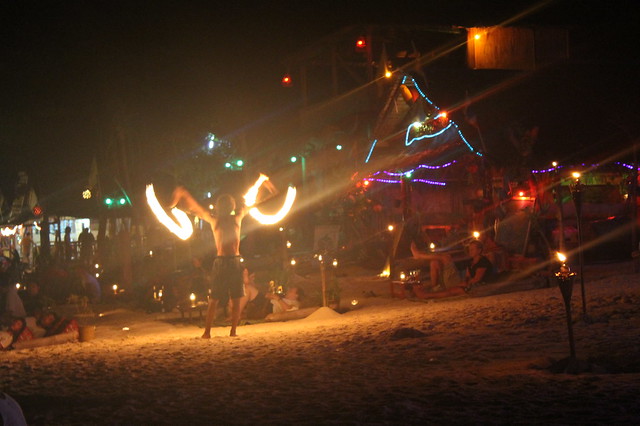 Finally we got back to the resort for some supper – Mocha float with tiramisu. Our katoey waiter/waitress was quite sarcastic! 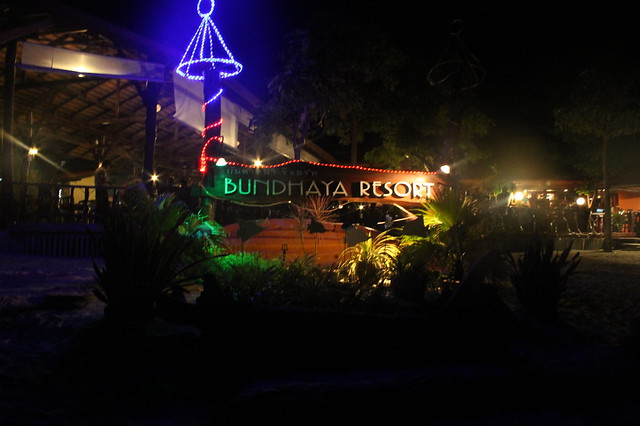 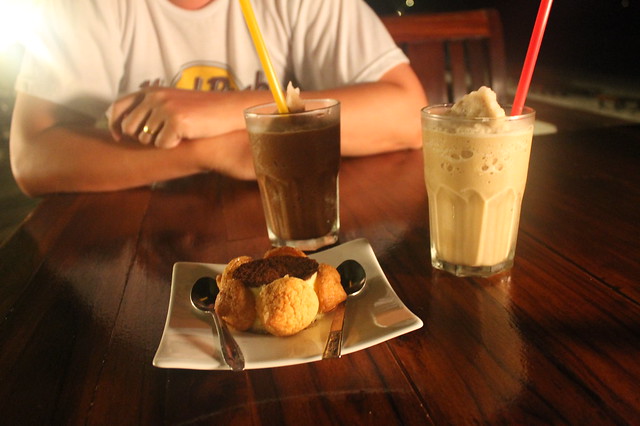