Day 6 started off in Noboribetsu. At 11.00 am, we are planning to catch a bus back to Chitose, so we still have a few hours to spare. Today, we plan to take the cable car up to Bear Mountain. But before anything, it’s time for a good breakfast at Manseikaku! Breakfast here was as good as dinner the day before. 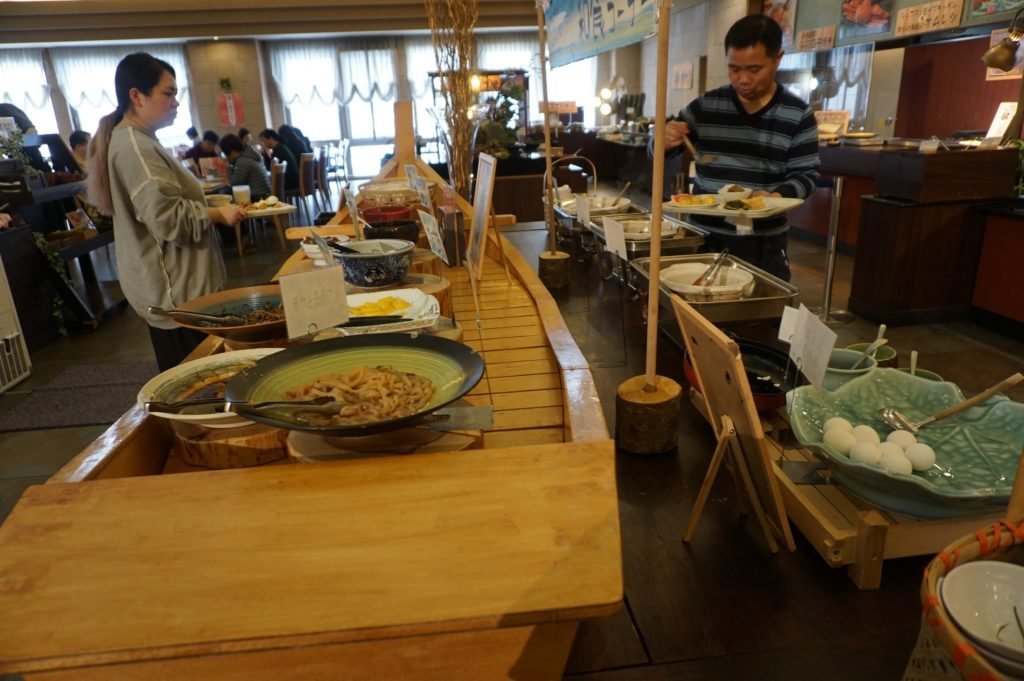 The cable car station to Bear Mountain is quite near our hotel, but the climb up (either by stairways or a longer trek on the road) is quite steep. The good thing is that our awesome hotel offers free shuttle van service. And they also offer a discount voucher for the cable car.

The lower station of the cable car is a simple affair. Buy your tickets at the counter, (and take photos with the many taxidermied bears if you want) then go upstairs to the cable car. The cable cars are a bit like the new Genting Skyway. 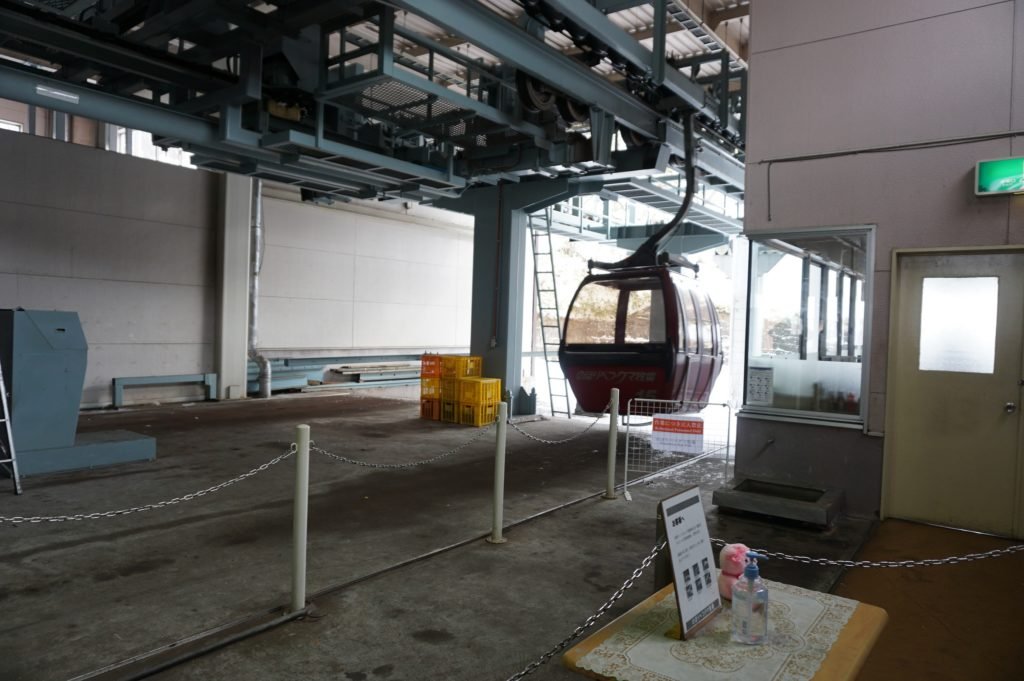 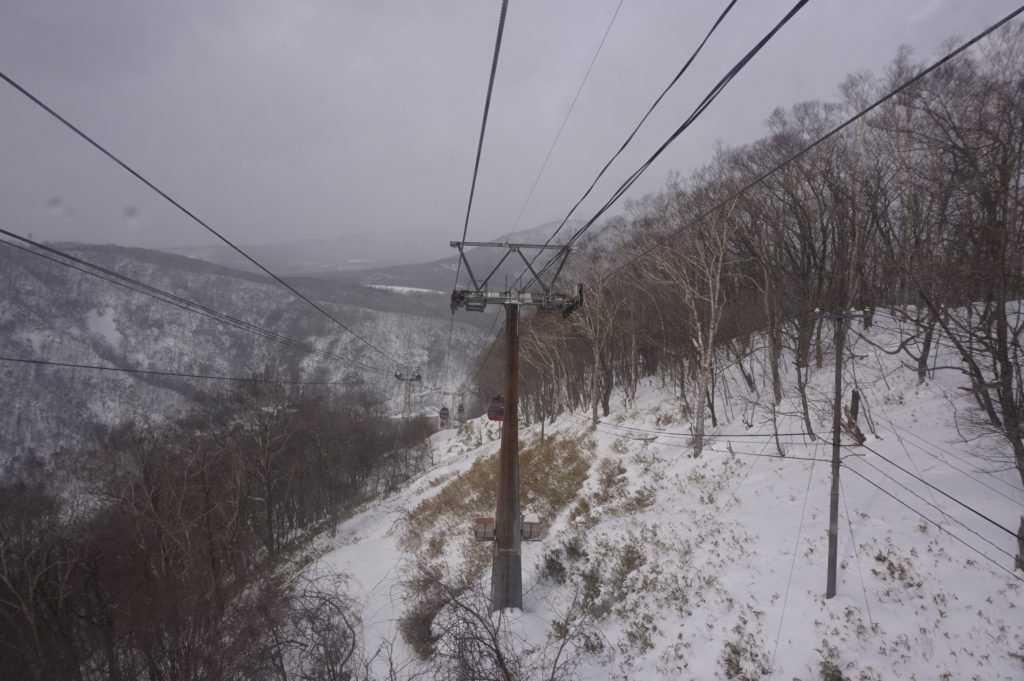 The ride up to the peak takes less than 10 minutes, but the view during the ride is simply breathtaking, especially in winter. Heavy winds rocking the cable car adds to the exhilirating ride…

Atop Bear Mountain, there isn’t really much to see. The the cable car station has a viewing deck upstairs, where it affords a stunning view of the surrounding valleys (though you can’t see the Hell Valley from here).

From there, well, we went to the Bear Park. There are two enclosures, one for a handful of males bears, and one more bigger one for a gaggle of about 20 female bears.

You can buy snacks to feed the bears, and they’re well trained to wave at you to attract your attention. 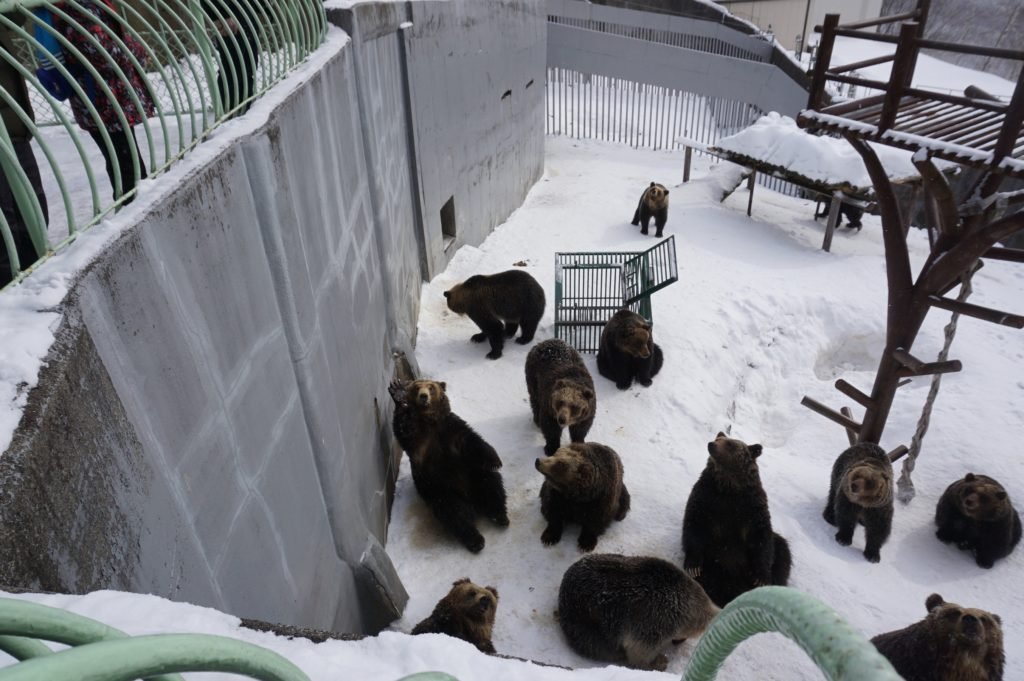 To be perfectly honest, this felt rather sad and with a tinge of animal cruelty, reducing these majestic animals to a side show and squeezing so many wild animals into such a small enclosure. But oh well… maybe i should write an email to them.

There’s also a duck race course. But no race ongoing. Just a bunch ducks freezing in the cold. 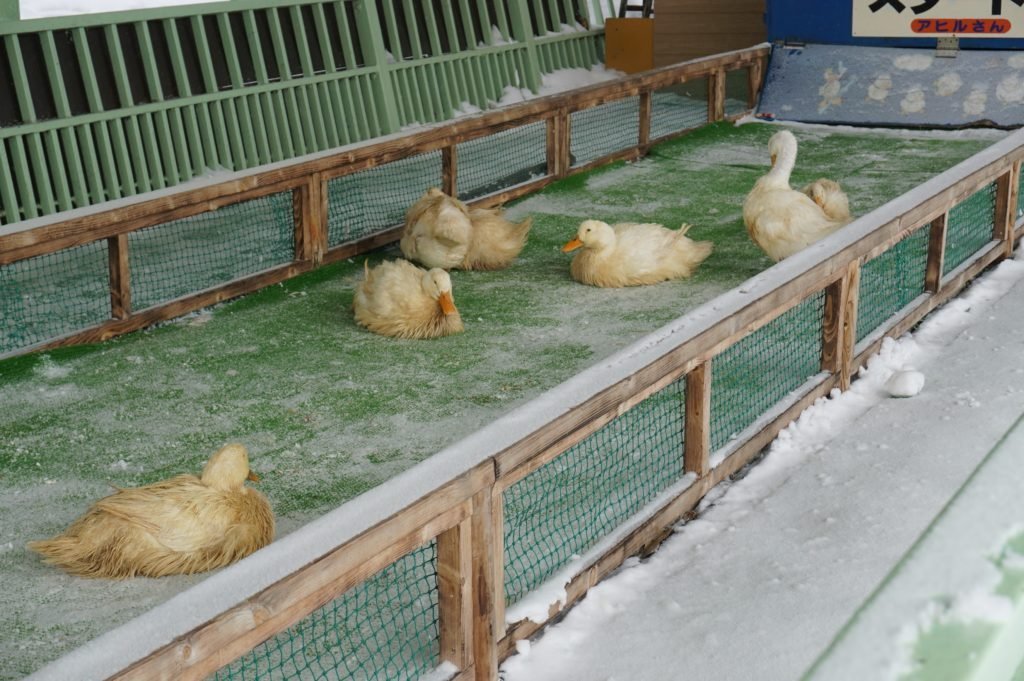 There’s also a dog show. But we were leaving soon, anyway the sign posted there said that today’s show was cancelled. Probably because Fifi and Fido were feeling a little under the weather… 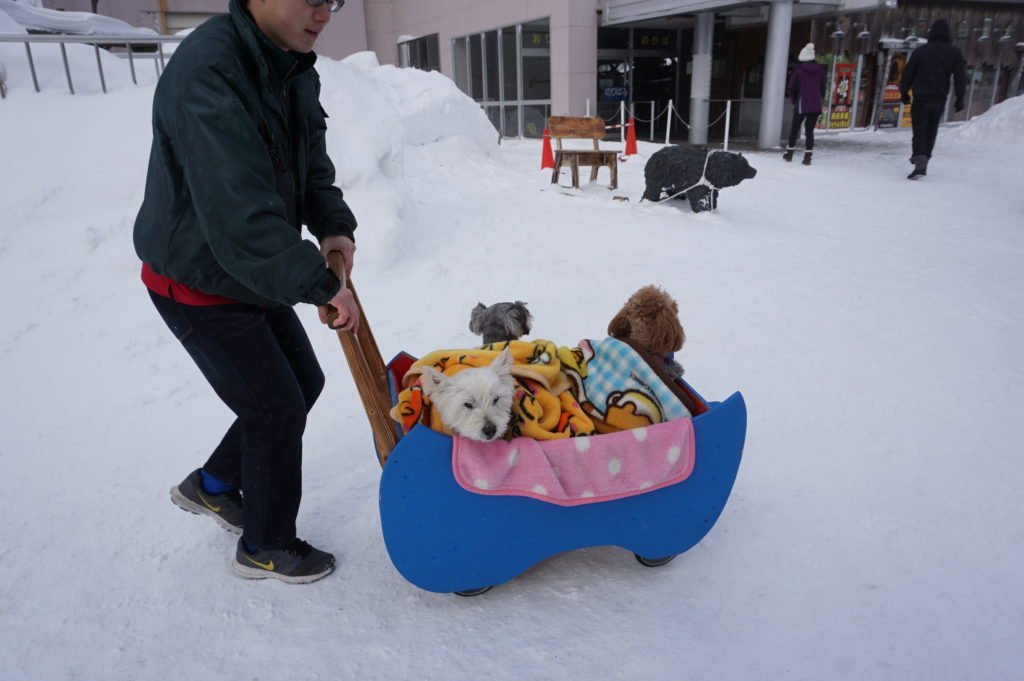 Before going down the mountain, just enough time to take a photo. 8 bears posing together, 4 of them fake. The other 4 freezing cold. 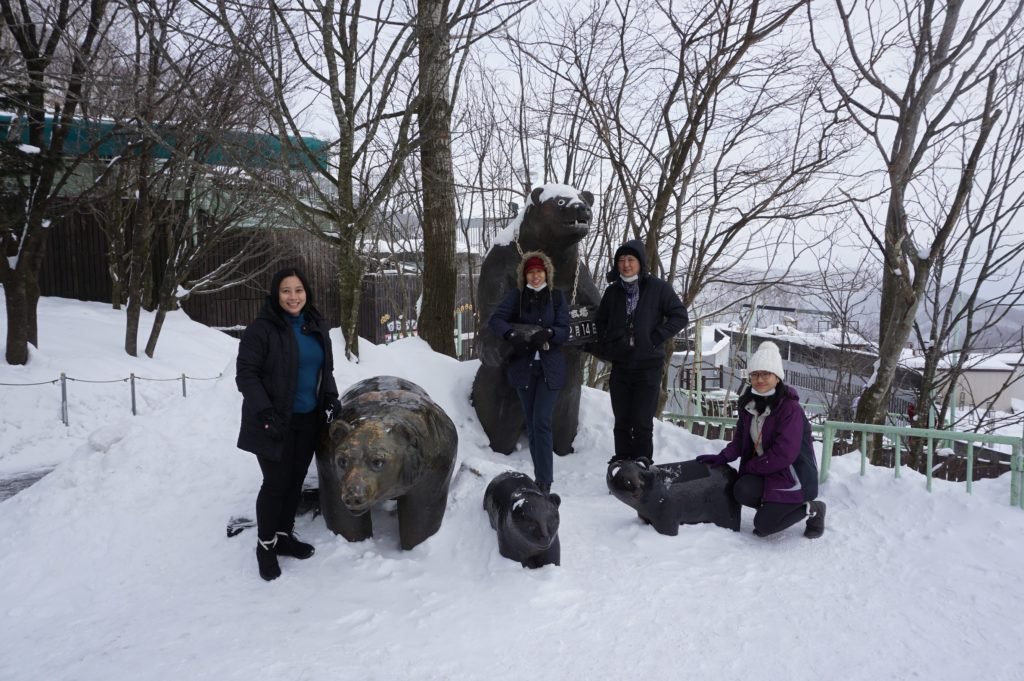 We went down the base station at 10:30 am, just 30 minutes to catch a shuttle van, pick up our luggage from the hotel, rush over to the bus station to buy the return tickets, and hope to queue for the bus isn’t too long. We made it just in the nick of time (We REALLY shouldn’t cut these things so close!). We actually took the last 4 seats in the bus, i had use my gloves and scarf to book the seats while my family struggled with the luggage from the hotel.

Crisis averted, we were on the way back to Shin-Chitose Airport.

For the next two nights, we are staying at the ANA Crowne Plaza in Chitose instead of in Sapporo City, for the simple reason that on our last day we are near the airport. Also today, we have a very relaxed scheduled. We plan to hang out in the Airport, then check in the hotel, and not have much to do.

Why hang out at the airport, of all places? Well, because Shin-Chitose has a lot of shops, more like a shopping mall (and a lot more pleasant than KLIA2, that I can promise you). The attraction here, besides the many restaurants, are the souvenir shops where you can buy all the Hokkaido specialty products from all over the island. Most of the shops offer free samples, so you can sample away all the delicious biscuits and chocs and crackers and ice cream… 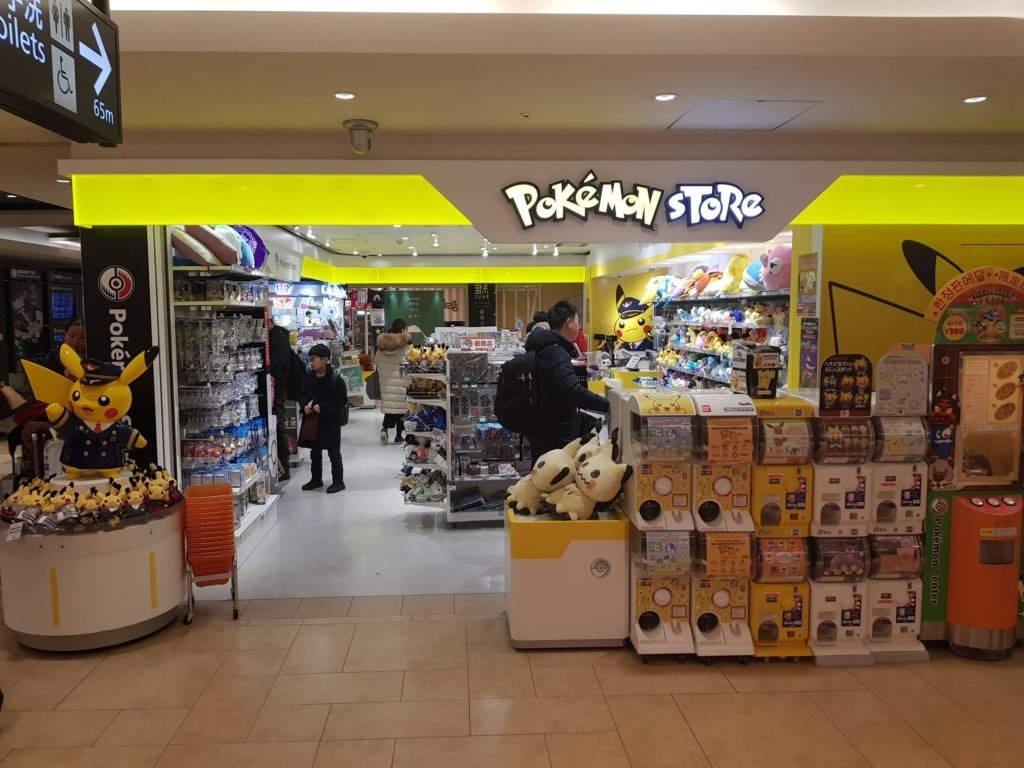 (This is famous Pokemon store in the Airport. Yes, they have a special store for it. Please take note, those still playing Pokemon Go. Yes, all three of you.)

We wanted to try Ramen Dojo, this huge restaurant that boasts of ramen from all over Japan under one roof. 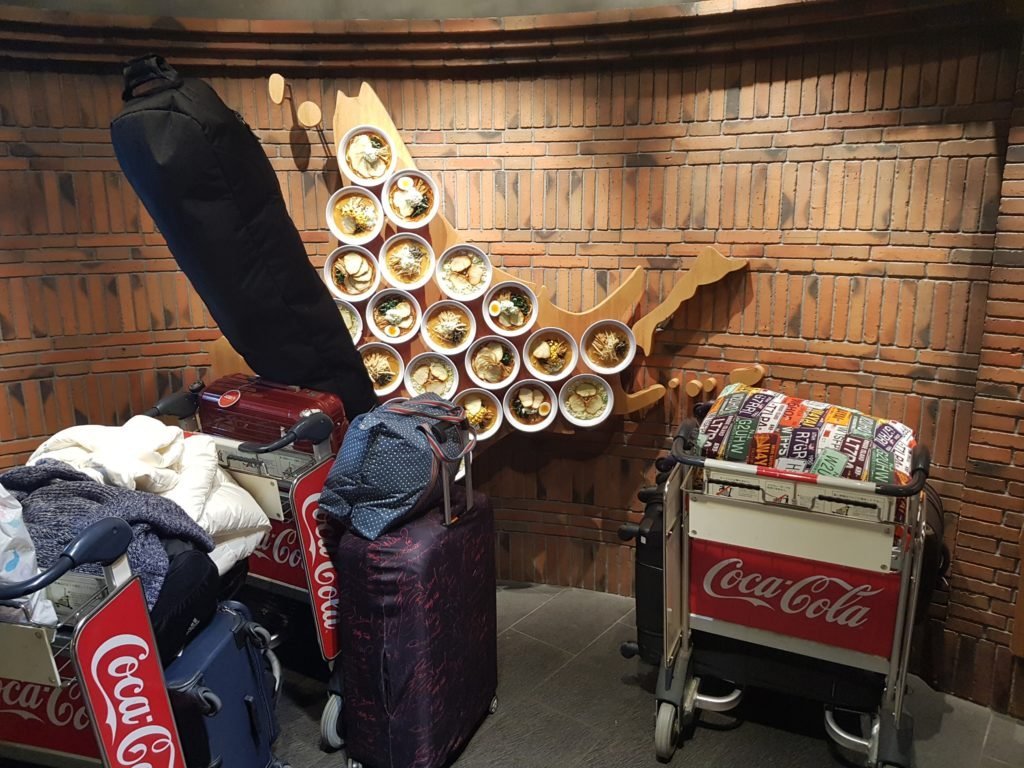 (Ramen Dojo. The photo would look nicer if not for all the luggage blocking the view)

Here’s how it works. You buy your ticket at the front, then you can choose your seat inside this large restaurant. 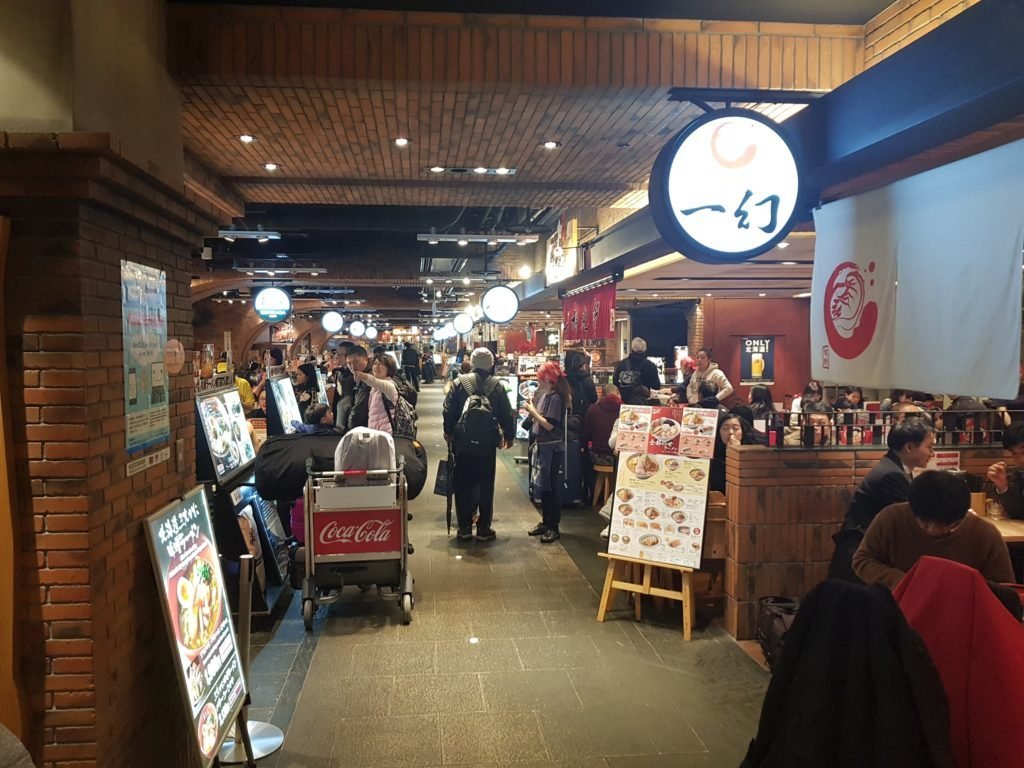 But look at the queue to order! OK, looks like we’re eating somewhere else. 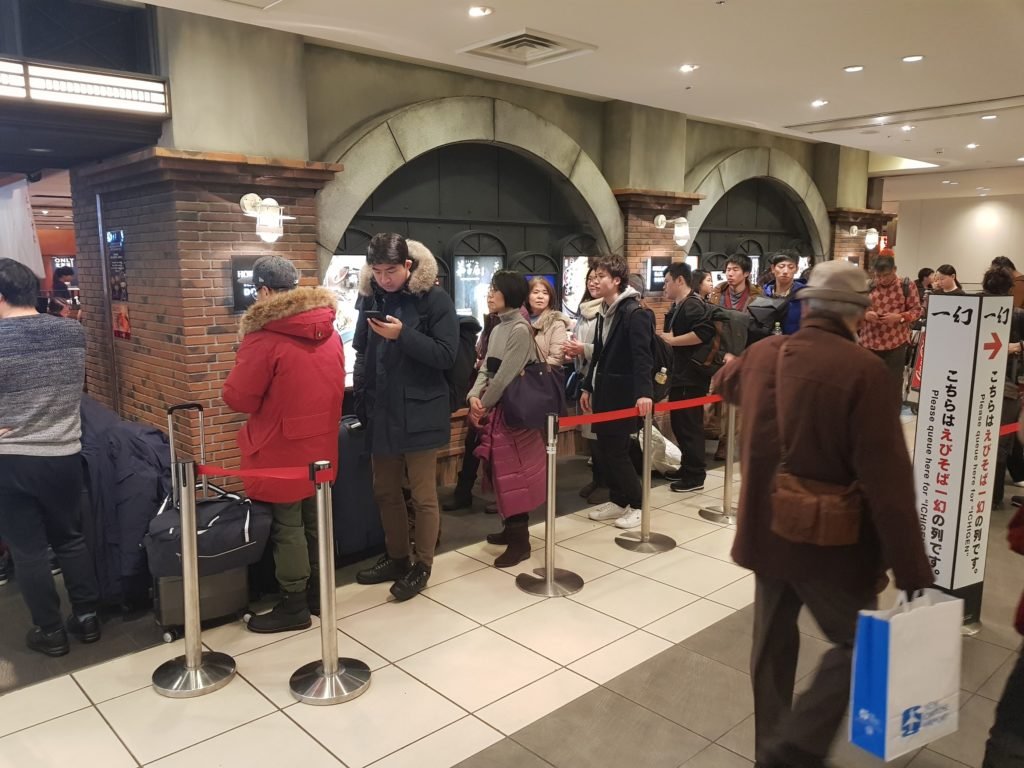 Oooo this restaurant looks interesting. At least you know what your order would look like. And quite affordable, too. 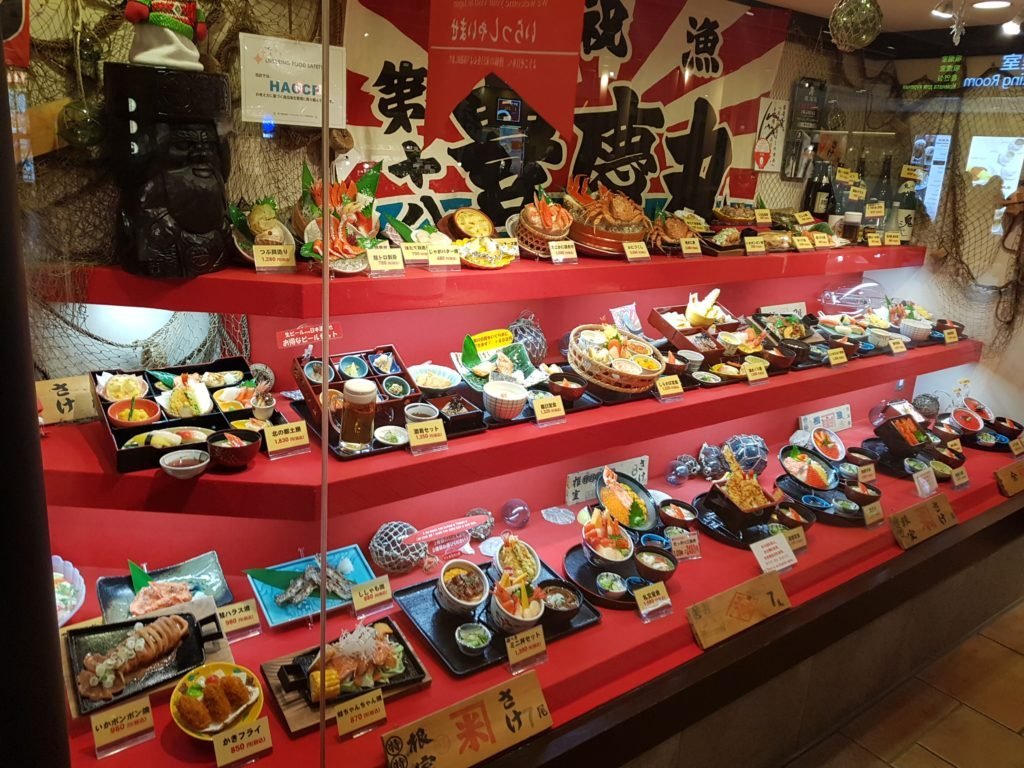 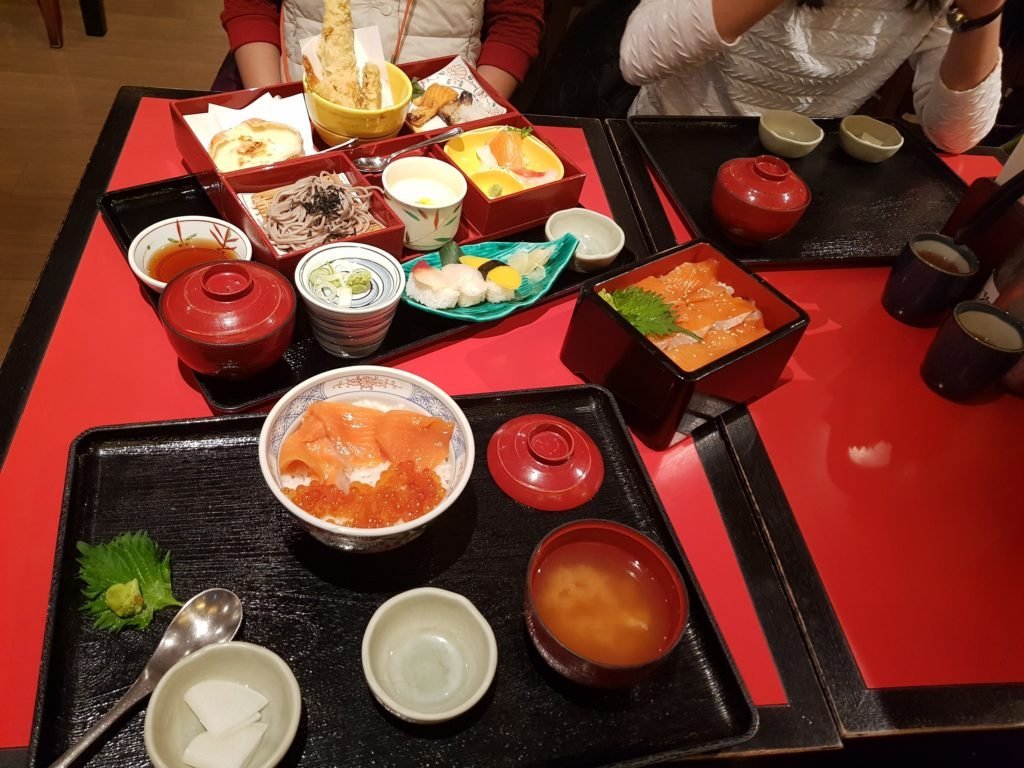 After lunch, we still had time to kill before check in, so we had some coffee. This was the only time we encountered that one-person-one-order rule that is common in Kyoto and Osaka (other establishment in Sapporo that we patronized did not impose this). But more coffee for us anyway. 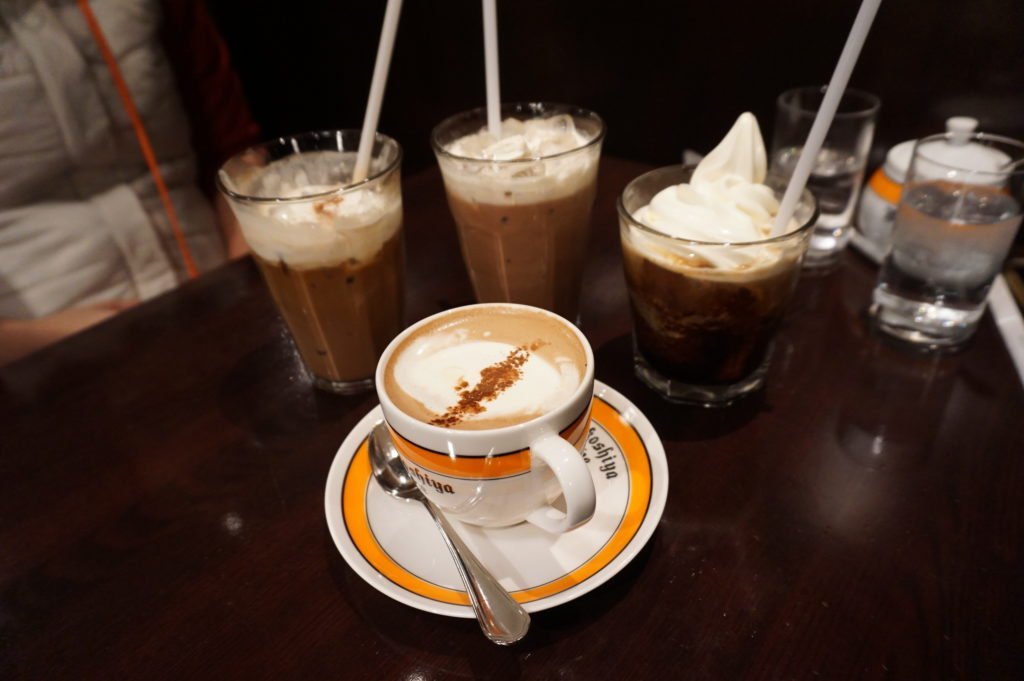 On to our hotel via taxi (also please note, taxis in Chitose are pricier than in Sapporo. The base fare starts lower, but they add up faster). (Our hotel is about 10 minutes from the airport)

ANA Crowne Plaza is quite a nice hotel, catered more for business travellers. We got adjoining rooms. 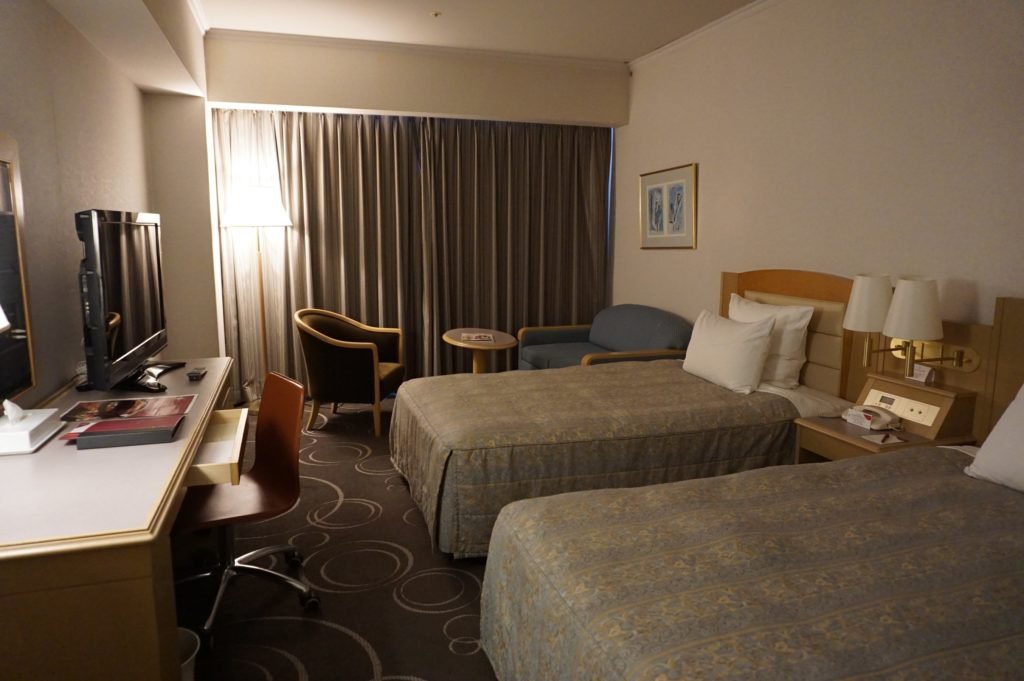 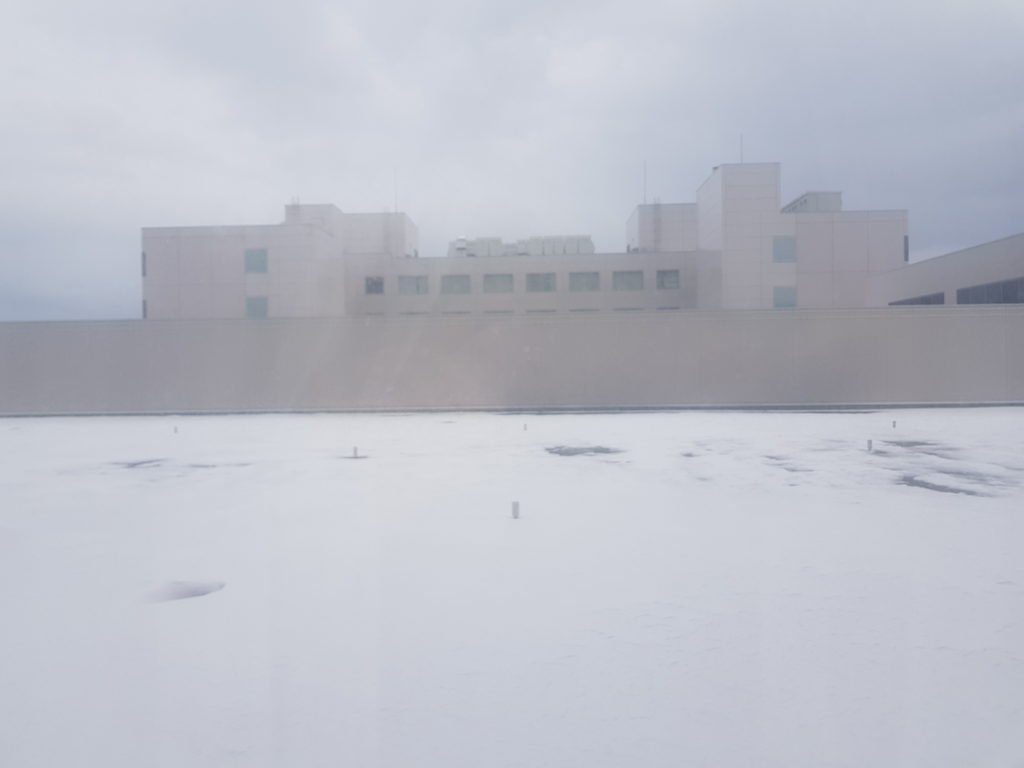 (View from our hotel room on the third floor. That’s an AEON next door).

Our original plan was to visit RERA Outlet Mall nearby. But after some consideration, we decided to skip it. They close at 7 pm, and we weren’t that big on shopping. So instead we took a cab to a huge Daiso to stock up on cheap household items you can’t find in Malaysia. And fortunately for us, the Daiso is conveniently located beside an equally large supermarket (the name was in Japanese, but translated it was Sapporo Co-op Something Something), so we also stocked up on groceries to take home to Malaysia like instant coffee, curry, chocolate, green tea, etc.

After our shopping, getting back to the hotel was tricky, though. We were right smack in a residential area, and no taxis were available. So we decided to walk back to the main road to increase our chances to catch a taxi. About 100 meters in our walk, lo and behold we saw taxi with the vacant sign lighted up!

Dinner… hmm where to eat. There are a few restaurants across from our hotel – a western BBQ restaurant called Royal Host, a KFC, and a Yoshinoya. All very convenient, but not the stuff to eat when you’re in Japan. Instead we asked the taxi to drop us off slightly further up from our hotel. Google maps showed me two local diners serving tonkatsu. We picked this one called Katsuya. 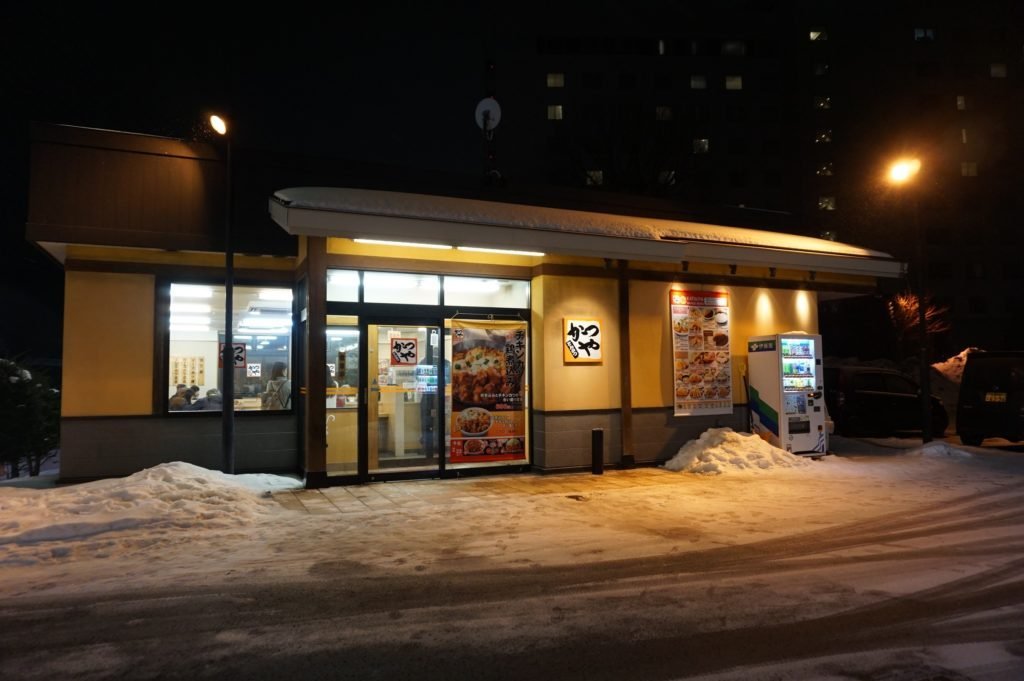 Aaaah, there’s nothing like a hearty authentic Japanese meal to warm you on a frigid winter night… 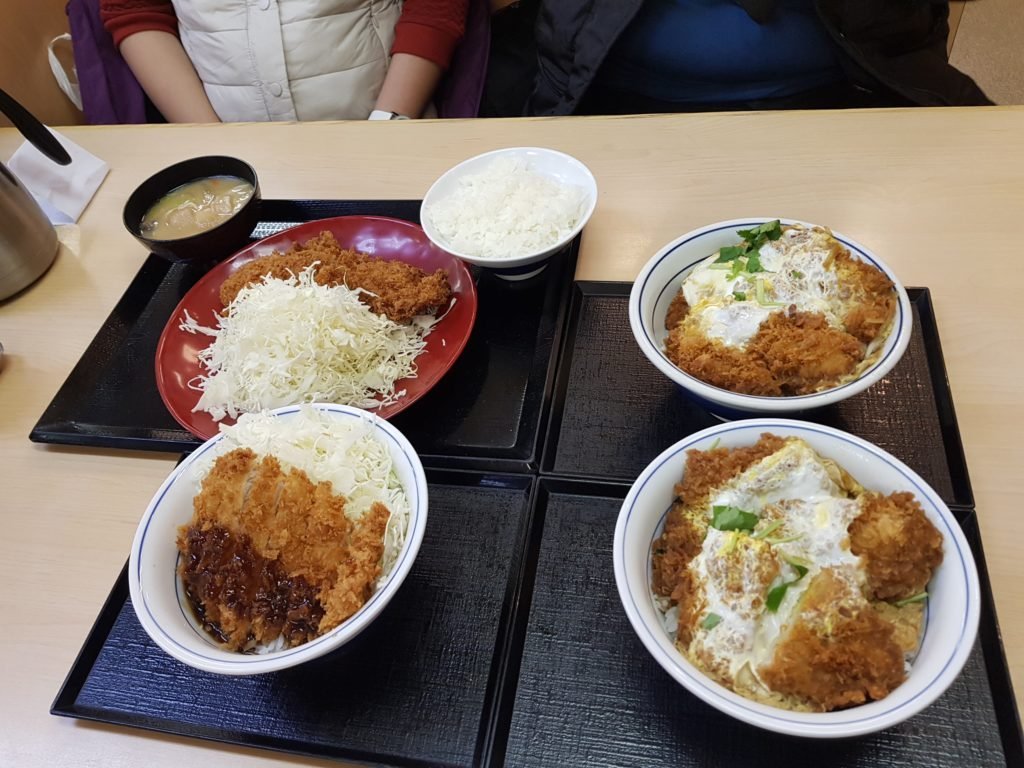 (our cheap but filling dinner)

Today has been a very low-key day, more to appreciate the local urban life and recuperate from the hectic days preceding this. Tomorrow will be one final hectic day in Otaru, but today, after dinner, we had an early night.

Next – The canal city of Otaru.