It was led by David Arumugam, with his Afro bigger than that guy from Boney M. Then there was his brother Loga, who was pretty much a thinner version of David, with a slightly smaller Afro (but still bigger than then-Malaysian striker Zainal Abidin Hassanâ€™s). I never understood what Loga did in the band, the only thing I ever saw him do was sing back-up and occasionally play the tambourine. Then there were a few Chinese dudes with short names like Ah Hock and Ah Sin or something like that. I believe the aforementioned Ah Hock played bass. 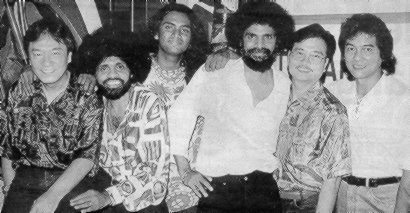 [tag]Alleycats[/tag] were old pros on the pub circuit, in their Penang hometown and in KL. Back in the 70â€™s and 80â€™s they had dozens of Bahasa Malaysia albums, with evergreen songs like â€˜Sampaikan Salam Cintakuâ€™, â€˜Keranaâ€™, â€˜Sekuntum Mawar Merahâ€™, and many more. Every time David Arumugam finished a song, he will shout his trademark â€˜Terima kaSIH!â€. Every time, without fail. There was one time I was at my Malay friendâ€™s wedding kenduri, this wedding singer belted an old Alleycats ballad â€˜ditujukan khas buat pengantinâ€™, and he ended with the exact same â€˜Terima kaSIH!â€, to which the crowd cheered vociferously.

When I was growing up, my neighbour a funky Chinese dude, was their biggest fan. He had cassettes of every single album they produced, and his obsession rubbed off a little on me.

One time many about 9 years ago, me and my pal Dave were out very late in town, when we heard that the Alleycats were rumoured to be playing in PJ Hilton. We rushed there, only to be disappointed to find out that it wasnâ€™t true. We stayed anyway to hear this so-so covers band with two lead singers, one pretty Indian girl and a fat Malay guy. Canâ€™t remember the name of the bandâ€¦

Alleycats are still around, no doubt it, although they are no longer headlining HMI on Saturdays, but still powering the pubs across the nation. In the age of indie bands like Love Me Butch and Gerhana Ska Cinta, Alleycats inhabit a different world of Malaysian music, pandering to a different generation of Malaysian â€“ Malays, Chinese, Indians and everyone else. Along with old guns like Kenny, Remy and Martin, Francessca Peters and the ilk.

I googled to see if they had a homepage, but didnâ€™t find much, but found this interesting blog entry regarding them (and even gives Ah Hockâ€™s full name!)

Hey, does anyone remember Man Bai and Gersang? Perhaps another day, thenâ€¦